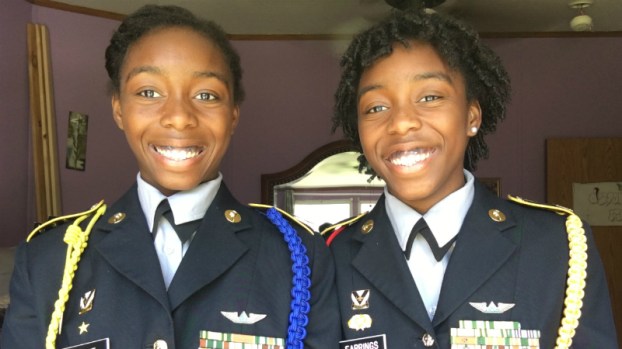 Fort Leonard Wood, once a small basic training post, is now a premier Army Center of Excellence, a U.S. Army training installation located in the Missouri Ozarks, training about 82,600 military and civilians each year.

These JROTC students may have taken separate flights, but they are united in their convictions. Explaining the benefits of enlisting into the Army National Guard, almost in unison, they said, “We have to think long-term.”

There are significant financial benefits to those who enlist. Having their college tuition, room and board and books paid for, “Makes it worth missing out on the beach this summer,” said Toni.

When asked if they were nervous, Tion responded, “From everything we have heard, it’s fun but no one wants to do it again. We are ready to get through it.”

Basic Combat Training is a gender-integrated, 10-week program designed to produce value-based, disciplined soldiers. It is not for the weary. The first three weeks is called the “Hammer Phase.”

“Being involved in JROTC will help us a lot,” said Tion. Together and with a giggle they added, “We will at least know how to march.” Toni added, “Knowing ranks, values and marching is an advantage.”

In actuality, the JROTC program at VMHS gives these cadets a significant leg up on an individual enlisting without any experience in that they are trained in teamwork, leadership and marching formations, and they know Army lingo as well as the Army Soldiers Creed.

These young women also have significant role models in both their Senior JROTC instructor Sgt. Maj. Mary Kyser and their grandmother, Dorothy Kidd, who they affectionately call “Mema.” This soft-spoken, reserved woman is an example of the saying; “Don’t judge a book by its cover.”

According to the twins, who are entering their senior year, Mema started working in the VMHS cafeteria when they were in the fifth or sixth grade. Ms. Dorothy Kidd is also retired Army Intelligence!

Responding to the statement, “Undoubtedly working in the cafeteria was your grandmother’s way of keeping an eye on you girls,” they laughed and said, “Yes ma’am!”

It takes no effort to understand the impact Kyser has had on these students. Tion selected her as the “Important Historical Figure” to study and present at this year’s Living History Museum.

Both Cadets have been selected for leadership positions for the upcoming school year. Tion will be Brigade Commander and Toni will serve as Command Sergeant Major. Together, they will be assigned over 150 Cadets, according to Kyser.

Impressive in every way, these young women are also graduates of Youth Leadership Shelby County. They both currently work at Chick-fil-A; Toni aspires to be a franchise owner.

When asked for a quote, they provided, “Go for future happiness” from Ted Gipson.