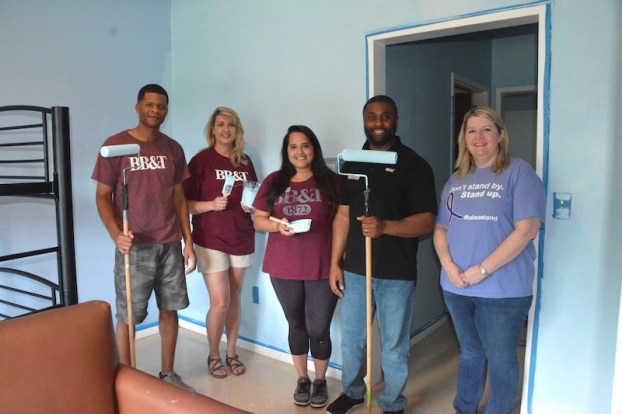 Volunteers from BB&T Bank in Pelham worked throughout the day May 29 to renovate two of the facility’s 12 residential rooms through SafeHouse’s Sponsor-A-Room program for its emergency shelter.

The volunteers repainted the rooms, hung wall art, assembled new furniture, made the beds with new linens, stocked the bathrooms with new shower curtains and towels and placed other new items in the rooms.

Residential Program Director Brandi Duke said the rooms haven’t been updated since the facility was built in 2007.

“We had some rooms that needed some TLC,” she said. “We’re just really trying to reach out to businesses, individuals and civic groups.”

Duke said SafeHouse has partnered with BB&T for at least two years on various projects, including financial education classes for SafeHouse residents.

Corey Green, vice president of BB&T’s Pelham branch and one of the Sponsor-A-Room volunteers, said he has much respect for Duke and her team and what they do for domestic violence and assault victims in Shelby, Chilton and Coosa counties.

“It’s been a game-changer for us, too,” Green said of the partnership. “We want to make our community a better place. We appreciate the opportunity.”

The purpose of the Sponsor-A-Room program is to ensure families fleeing domestic or sexual violence situations have a safe and comfortable place to stay as they heal.

Sponsorship levels range from $700-$1,500 to provide materials for rooms.

Duke said she is trying to find sponsors for the remaining 10 rooms before the year is over.

The program is a part of SafeHouse’s 30-year celebration.

An anniversary gala event, “Moonlight Masquerade: Unmasking Domestic Violence,” is planned for Aug. 17 at 6 p.m. at the American Village.

Tickets are $100 per person and can be purchased at Safehouse.org.