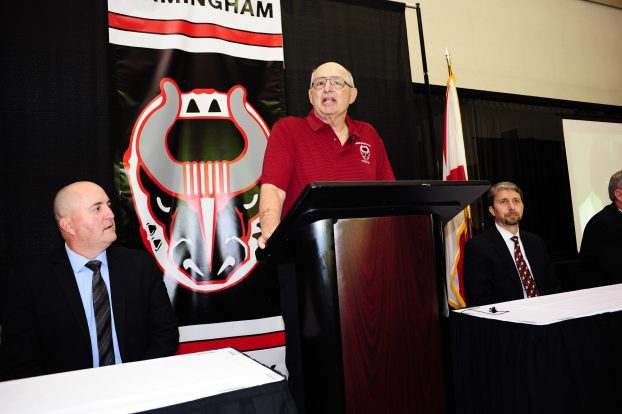 Birmingham Bulls General Partner Art Clarkson has decided to step down from the organization after a legendary career as a sports promoter in the state of Alabama. (File)

Art Clarkson steps down from Bulls

PELHAM — Art Clarkson, one of the most legendary sports promoters in the history of the State of Alabama, will be leaving the managing partner position of the Birmingham Bulls.

Clarkson, 77, cemented his sports legacy in the region long before reviving the Bulls hockey club at the Pelham Civic Complex for the 2017-18 season.

A fixture in the region’s professional sports landscape, Clarkson also owned the Bulls during the East Coast Hockey League days in the 1990s and owned the Birmingham Barons during the Michael Jordan era. He went on to launch arena football in Huntsville and managed multiple professional teams across the country.

Clarkson knew the Birmingham area was hungry for hockey again after the cancelation of the Bulls when they were a part of the ECHL, and started figuring out how to bring the program back to life.

He and the city of Pelham eventually worked something out after the BJCC decided they didn’t want to be a part of it, and that’s when the Bulls announced their return.

From day one, Clarkson made everything about the future of the program, and not about the present.

“We’re not assuming anybody is going to show up,” Clarkson said before the inaugural season. “That’s my premise. So we’re going to have to not only play hockey, but market this team. My philosophy is, you don’t promote for opening night, you promote until the last game of the season so you can start building some momentum. You give people a reason to come out to the game and say ‘what am I missing?’”

With the return, the first season featured a slow start, a push for a playoff spot, and then a slow end, but also saw promotions for the program and hockey in a professional setting in the newly renovated Pelham Civic Complex.

With Clarkson’s patience, he helped the Bulls grow as a team and helped the fans get excited about hockey deep in the heart of Alabama again.

That led to a spectacular and exciting second season for the franchise as the Bulls made it all the way to the SPHL President’s Cup Finals before losing to Huntsville.

Now, the city has a reason to get excited about hockey again.

But the area will also be losing one of the greatest promoters in the state of Alabama with the departure, meaning the Bulls will have their work cut out for them moving forward with Clarkson’s departure.

Joe Stroud, the organization’s general manager, will remain with the Bulls and guide the club’s operations for the time being.

“He is truly the PT Barnum of minor league sports, and we hope to see him in the Alabama Sports Hall of Fame very soon,” Stroud said.

Coached by Bulls legend Jamey Hicks, the team — in only the second season since the franchise’s revival — Birmingham posted a 39-15-2 record this past season.

“Art will always be synonymous with hockey in Birmingham,” Hicks said. “He was an owner, mentor, and most importantly to me a friend. I will be forever grateful to him for introducing my family to the Bulls logo.”

The Bulls’ 2019-20 season begins in October. For ticket and sponsorship opportunities, visit Bullshockey.net or contact the office at 205.620.6870.

By ALEC ETHEREDGE | Sports Editor PELHAM – After a historic season just two years into its franchise, the Birmingham... read more