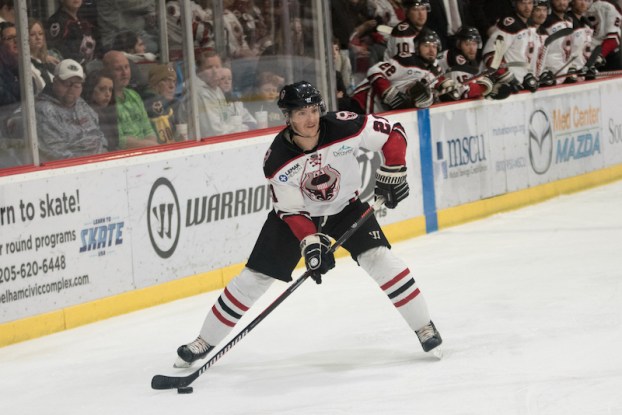 Garrett Schmitz, above, was one of two players to make the Bulls’ roster last year after earning a spot on the team through the free agent summer try out. (File)

PELHAM – Coming off a championship appearance season in just their second year as a team, the Birmingham Bulls are trending in the right direction after the 2018-2019 season.

Now, Birmingham is hoping to add a few more key pieces to the franchise during the upcoming 2019-2020 season with a free agent camp that will be held from July 12-14 at the Pelham Civic Complex.

While making the team from one of these camps may not seem like great odds, the Bulls area team that took advantage of the camp last year by adding both Garrett Schmitz and Sam Williams to the team from the camp.

Schmitz went on to be named to the 2019 All-SPHL First Team and All-SPHL Rookie Team after a remarkable rookie season with the Bulls.

The opportunity for Schmitz was seen as possibly his last, but he made it count.

“I thought to myself ‘This is it. If I don’t make this then my hockey career is probably over,’” he said.

Schmitz made such an impact, that the coaching staff knew they had to have him right away.

“We normally talk about it for a few days after to make a decision on who that guy is going to be,” Hicks said. “But we called Schmitz back in basically before he left our facility.”

Now, there’s a chance for another athlete to make that same impact on Hicks and his coaching staff this year.

One way to create excitement around the camp is the guarantee that at least one of the players attempting to make the team will earn a spot on the training camp roster before the season.

Right now, there are openings for 27 forwards, 18 defensemen and six goalies at the camp.

Players must provide their own equipment with visors mandatory, and they’ll participate in one practice and three games during the camp. There will also be an additional goalie session.

It’s a chance for players looking to prove their ability at the professional level. Schmitz was a player getting no attention out of college, but he made the most of his opportunity, and the Bulls are hoping someone else will do the same this season.