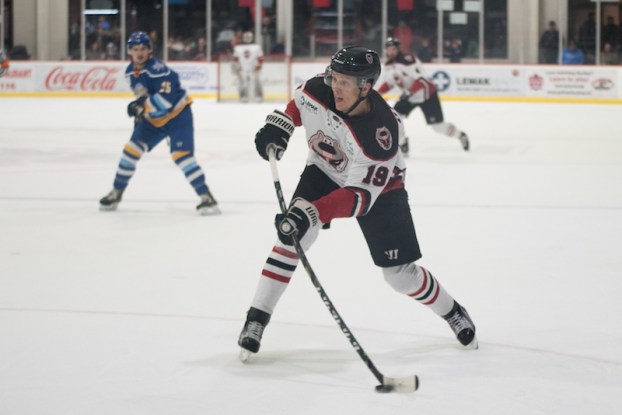 The Birmingham Bulls have released the date of each home game for the upcoming 2019-2020 hockey season, which will kick off in October. (File)

PELHAM – After a historic season just two years into its franchise, the Birmingham Bulls will still enter the 2019-2020 hockey season with some unfinished business after coming up short of a championship in the SPHL finals this past season.

That should lend itself to an exciting season to visit the Pelham Civic Complex to see the Bulls in action, as the team looks for redemption, and with 28 home games on their schedule, there will be plenty of opportunity.

It’s hard to believe that the season is just four months away, but that will mark Birmingham’s first home game of the season as they took to home ice on Friday, Oct. 18.

It’s unclear who the Bulls will play in that game as of now, but last year, they opened the season against Huntsville at home on Friday, Oct. 19, with a 5-4 victory, which sparked an 11-0 start to the season.

That will mark the only home game in October for Birmingham, who will return home on Nov. 1. During the month of November, the Bulls will play six games at home, which ties for the most of any month on this year’s schedule.

In December, Birmingham will get five home games, followed by six more in January, making the stretch from November to the end of January extremely important with 17 games on home ice.

That will be followed by five more home games in both February and March before the playoffs kick off near the beginning of April.

During the 2018-19 season, the Bulls responded to a lackluster first season by going 39-15-2 earning a spot in the SPHL Presidents Cup Finals before falling to the Huntsville Havoc.

Now, they’ll return a large cast of players and hope to have just as special of a season during the 2019-2020 season.

To view the entire home schedule and to purchase tickets visit Bullshockey.net.

By ALEC ETHEREDGE | Sports Editor PELHAM – Coming off a championship appearance season in just their second year as... read more