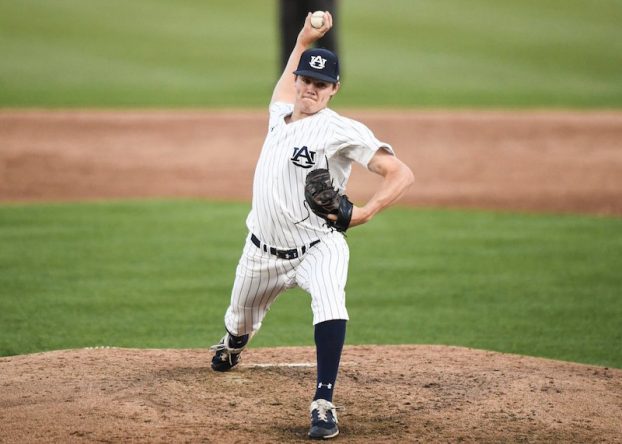 Freshman Auburn pitcher Richard Fitts went 5.1 innings and earned a victory as the Tigers defeated North Carolina 14-7 in game three of the Super Regional on Monday, June 10. Auburn will advance to the College World Series for the first time since 1997. (Contributed/Auburn Athletics)

CHAPEL HILL, N.C. – A little more than 24 hours removed from being shutout 2-0 against North Carolina in game two of a best-of-three game series in the NCAA Baseball Super Regional, the Auburn Tigers faced a win or go home situation on Monday, June 10, and from the start, Auburn made sure their season wouldn’t come to an end in Chapel Hill.

Before the decisive game three, multiple reports pointed to the fact that former Helena High School and freshman Auburn pitcher Richard Fitts would start against North Carolina, but roughly an hour before the game, Auburn head coach Butch Thompson decided to go with sophomore Tanner Burns on the hill in order to try and get off to a good start. The late decision worked to perfection.

Auburn certainly got off to a good start, as the Tigers unbelievably scored 13 runs on nine hits in the top of the first inning to give the Auburn pitching staff a 13-0 lead to work with the remainder of the game.

Limited by a sore shoulder in recent weeks, Burns was effective for Auburn as he pitched two innings allowing no runs and struck out three on 26 pitches to start the game.

Once Burns was pulled, the stage was set for Fitts, who entered the game in the bottom of the third inning needing to gobble up innings and preserve the large lead for Auburn.

Fitts, who has been a reliable source out of Auburn’s bullpen for much of the season had more than a week of rest and was coming off a stellar performance in game two in a Regional against Georgia Tech a week prior. In that game, Fitts pitched the final six innings of the game without allowing a run and only gave up four hits, while striking out four batters and walking none.

Against North Carolina, the freshman was very effective, and on a huge stage he earned the victory for Auburn after pitching 5.1 innings where he struck out four Tar Heel batters and allowed six runs on seven hits.

Fitts got Auburn to the eighth inning, where closer Cody Greenhill entered the game to record the final four outs as the Tigers defeated North Carolina 14-7 to earn a trip to Omaha for the College World Series.

The win snapped a 22-year drought for the Auburn Baseball program, as they will now travel to Omaha as one of the best eight teams in college baseball. They will take on Mississippi State in game one of the College World Series.