COLUMBIANA – A Florence man who pleaded guilty to child abuse was sentenced to 18 months in prison. 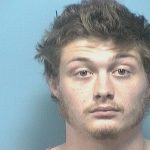 Harrison Gregory Gilbert, 22, was arrested by the Shelby County Sheriff’s Office after he allegedly “tortured, willfully abused, cruelly beat or otherwise maltreated” a 2-year-old child that was in his care in September 2017.

The incident, and the arrest, occurred in Sterrett.

SCSO Deputy Debbie Sumrall said the child was admitted to Children’s of Alabama in Birmingham and later released. The child and Gilbert are not related, she said.

Gilbert pleaded guilty to the Class C felony and was sentenced on Monday, June 10, to 120 months in the Alabama Department of Corrections, split with 18 months in a DOC penitentiary with the remainder suspended on probation.

“The victim’s family and law enforcement have been consulted and are in agreement with this settlement,” read the sentencing order.

Gilbert was also required to pay court costs and avoid initiating contact with the victim and victim’s family.