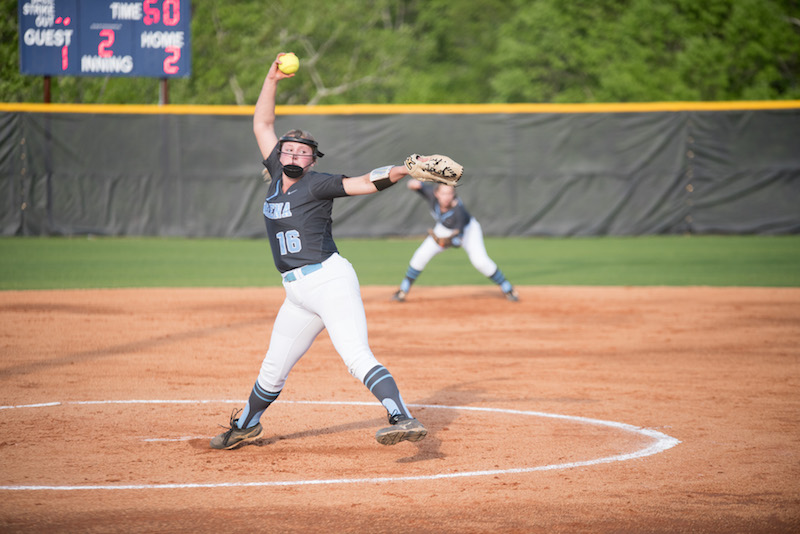 Helena's Avery Barnett had a stellar softball career with the Huskies and closed it out by earning a spot on the 2019 All-County team. (Reporter photo/Keith McCoy)

With three teams advancing to the state tournament, eight teams being ranked throughout the year and 22 players named to the 2019 All-State team, the 2019 softball season was full of excitement watching some of the best players from across the state take to the field.

With those 22 players making the All-State team and just 30 spots available between the first and second team on the All-County team, earning a spot on this year’s All-County team is an extremely high honor.

Those numbers are incredible for one local area, and are highlighted below on the 2019 All-County softball team.

Pitcher: Annabelle Widra, sophomore, Spain Park. One of the best overall players in the country, Widra didn’t just dominated in the circle this season, but put up some of the state’s best numbers in the batter’s box too. Pitching wise, Widra again was named the county’s Pitcher of the Year after posting an ERA of 1.33 with a county-high 237 strikeouts. In 137 innings, she allowed just 26 earned runs to finish the season 22-2 overall. At the plate, Widra batted .490 and finished second in the county with 72 hits and led the county with 70 RBIs. She had 18 doubles, four triples and six home runs. Widra also added 32 stolen bases and 27 walks this season.

Pitcher: Maddy Walker, Sophomore, Vincent. Walker actually finished second in the county in strikeouts just one behind Widra with 236 of her own. She finished the season 20-9 with an ERA of 1.74. At the plate, she batted .381 with 32 hits and 36 RBIs.

Pitcher: Briana Copeland, sophomore, Pelham. It was another fantastic season for Copeland, who finished 2019 with an 18-9 overall record and an ERA of 1.79, while posting 193 strikeouts. She also had a good year offensively with 37 hits and 31 RBIs. She finished with a batting average of .356 and had 12 doubles and six home runs.

Pitcher: Eleanor DeBlock, freshman, Thompson. In 97 innings pitched this season, DeBlock got the support of one of the state’s best offenses and went on to post a record of 10-2. She held an ERA of 2.01 and struck out 90 batters allowing just 28 earned runs.

Catcher: Taylor Wheat, senior, Briarwood. Wheat left her mark in the Briarwood history books, and went out on top during her senior season. The Lions’ catcher finished 2019 with a batting average of .442 and had 34 hits, 38 RBIs, 21 runs scored, seven doubles, three triples, seven home runs and 12 walks.

First Base: Caroline Wooley, senior, Spain Park. Easily one of the best first basemen in the county, Wooley finished the season with a batting average of .402. She totaled 45 hits and 38 RBIs with nine home runs and seven doubles. She also scored 32 runs and walked 13 times.

Second Base: Madison Plunkett, senior, Thompson. One of the players with at least 50 hits, Plunkett held a batting average of .472 this season with 50 hits, 41 runs scored and 31 RBIs. She had 11 doubles, five triples and three home runs with 18 walks and eight stolen bases.

Third Base: Kennedy Foote, junior, Thompson. Another dangerous threat for Thompson, Foote posted an average .442. She totaled 38 hits, 31 runs scored and 30 RBIs. She also finished as one of the county’s best with 14 doubles.

Outfield: Kindall DeRamus, senior, Thompson. While DeRamus’ average of .478 sticks out, her county-high total of 38 stolen bases was special. She stole all 38 bases without being caught stealing once this season. She also dominated at the plate with 63 hits, 56 runs scored and 28 RBIs.

Outfield: Maddie Majors, senior, Spain Park. Majors has been one of the best players in the state for several years, and she closed out her career in dominant fashion. Her senior season featured an average of .448, while finishing fourth in the county with 65 hits and second in the county with 69 RBIs. She picked up 36 runs scored, 14 doubles and 10 home runs.

Utility: Yoly Paredes, senior, Pelham. Paredes’s biggest highlight was her power at the plate finishing third in the county with 12 home runs. She held an average of .464 this year, and posted 58 hits, 42 runs scored and 41 RBIs.

Utility: Maggie West, junior, Shelby County. With her 66 hits and 65 runs scored, West finished third in the county in hits and second in runs scored. She also drove in 31 runs, and nine doubles, five triples and five home runs. West closed the year with an average of .468.

Designated Hitter: Abi Brown, junior, Oak Mountain. Oak Mountain was young this year, but saw some players really step up, including Brown. She ended her junior season with a batting average of .462 posting 55 hits and 48 RBIs. She was also one of the best power hitters with 13 doubles and 10 home runs.

Designated Hitter: Peri Clark, junior, Shelby County. It’s hard to believe Clark still has a year left with the numbers she put up, but as a junior, she led the county with 18 home runs, 76 hits and 87 runs scored. She also posted 55 RBIs and posted a batting average of .555, which was second only to Montevallo’s Allie Tryon. She also displayed patience with 25 walks.

Pitcher: Avery Barnett, senior, Helena. Barnett’s stellar career came to an end with an ERA of 2.188 and an overall record of 19-10. She also totaled 90 strikeouts to lead her team to the state tournament.

Pitcher: Lacy Marty, sophomore, Oak Mountain. Still young, Marty gained a lot of confidence this season with her 14 wins in the circle. She also finished the season with an ERA of 2.98.

Pitcher: Kate Campbell, senior, Spain Park. Campbell played a lot during her final year with the Jaguars and finished the season with an ERA of 2.712. She also struck out 76 batters during the 2019 season.

Catcher: Brooke Burback, junior, Chelsea. Burback batted .409 this season and second on Chelsea’s team with 38 hits and 17 RBIs. She also scored 11 runs and had 12 doubles.

First Base: M’Kiyah Mitchell, senior, Oak Mountain. Mitchell’s 40 hits and 43 RBIs really stuck out this season, as she finished the year with a batting average of .388 and posted 11 doubles.

Second Base: Taylor Harington, junior, Spain Park. Harrington was a consistent player this season for the Jags, and seemed to knock base hits in key moments all season.

Third Base: Meaghan Marfice, senior, Calera. One of the leaders of a young team Marfice posted a batting average of .473 this season and picked up 43 hits and 28 RBIs with 15 doubles.

Outfield: Chloe Eidson, senior, Chelsea. Eidson’s average was just slightly below .400 at .395, but she posted 47 hits, 20 RBIs and 18 runs scored during her final year with the Hornets.

Outfield: Dawn Autry, sophomore, Oak Mountain. Autry ended 2019 with a batting average of .442 and was one of the best sophomores in the area with her 57 hits, 13 of which were doubles.

Outfield: Mikayla Touhey, senior, Thompson. Touhey posted a batting average of .445 with 53 hits, 37 RBIs and 35 runs scored for the Warriors this season. A total of 15 of her 53 hits were doubles.

Utility: Bailey Bowers, senior, Spain Park. One of the best dual-sport athletes in the county, Bowers flashed some clutch play during her senior season posting a batting average of .400 with 46 hits, 32 RBIs and 30 runs scored.

Designated Hitter: Grace Robertson, senior, Thompson. Robertson had a special season in 2019 and ended her final year with the Warriors by posting a batting average of .442 at the plate. She also totaled 57 hits, 46 RBIs and 33 runs scored.

Designated Hitter: Allie Tryon, freshman, Montevallo. Just a freshman, Montevallo is extremely high on Tryon who led the county with a batting average of .609. She didn’t get nearly the number of at bats as some of the county leaders with just 64, but she still picked up 33 hits, 15 of which were doubles, and23 RBIs in her time.