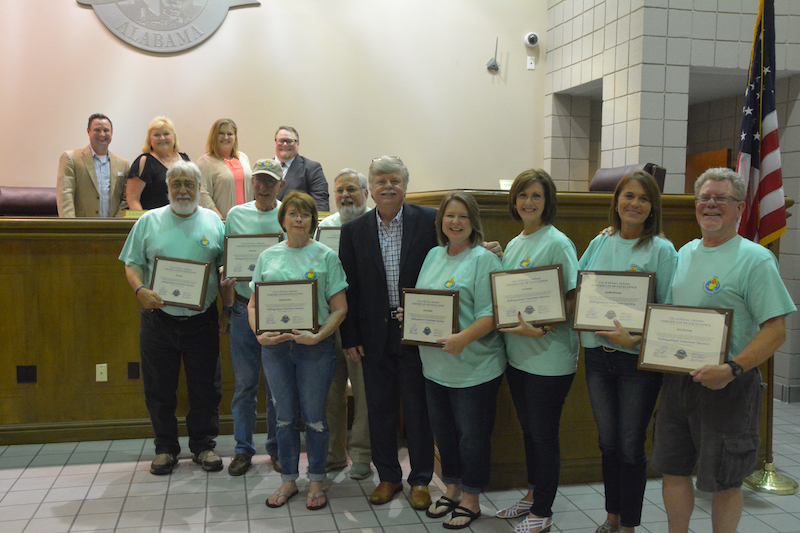 The retired Buck Creek Festival Committee were presented with plaques and a resolution from the Helena City Council on Monday, June 10, for their hard work and dedication over the last 18 years. (Reporter Photo/Graham Brooks)

The Buck Creek Festival Committee, which announced their retirement after 18 years of dedication and commitment, were on hand at the June 10 Helena City Council meeting to present several checks to organizations that devoted their time and gave volunteer efforts.

Longtime festival organizer Cris Nelson said the success of the festival would not be possible without the volunteer efforts of dozens of people.

“Our volunteers, apart from the committee volunteers, which I want to say is my heart and soul of the event, they really are,” Nelson said emotionally. “But they rest of y’all, we could not do this without our volunteers, meaning the teen council and the belles and the police and fire explorers, Christ Community Church and so on. This isn’t just about eight people, this is 60-80 people that make this happen in order to make the festival go off without a hitch so we want to try and say thank you.”

The organizations were presented checks after dedicating time and effort to help better the festival by doing things like picking up trash, working merchandise tents, helping run the concession stand, helping with public safety, volunteering at the children’s activity area, helping with the duck race, providing help on short notice and more.

The donations given to the organizations were as follows:

After awarding each group, the main core committee revealed one last check that featured the grand total of $328,298 which represented the amount of money raised over the 18-year history of the festival.

To honor the outgoing committee, the Helena City Council presented the eight members with plaques and a resolution commending their efforts from the past 18 years.

“We just can’t say enough about what you guys have done for 18 years and how important it’s been to the city,” Helena Mayor Mark Hall said. “What an asset and privilege it’s been and y’all never missed a beat and kept working. Each and every one of you gave everything you had.”

Although the main Buck Creek Festival Committee retired, the festival will continue going forward in 2020 with the formation of a new committee.

For more information on the Buck Creek Festival, visit Buckcreekfestival.com.