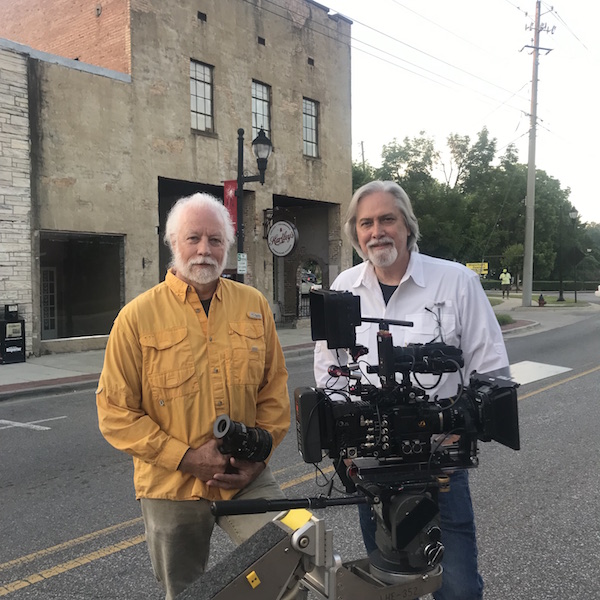 David Brower and Rick Pennington of Sunspot Pictures have been filming in Alabama for 25 years. (Contributed)

“I need a 20 on Dawn,” the voice crackles over the walkie-talkie.

“Hey mom, where is the green power cord?” was the response. Dawn Taylor, the Craft Services Manager, smiles and calls back to her daughter with an answer.

She has worked for Sunspot Pictures for 20 years.

She and her daughter Emily are from the Birmingham area.

They are a perfect example of the small-town focus the small filming company and Alfa Insurance has when it comes to doing business in Alabama.

We met Dawn in the wee hours of the morning when Sunspot Pictures took over Main Street in Columbiana. Sunspot had come to Columbiana to film one of several Alfa commercials at four locations in the small town over two days.

Rick Pennington and David Brower are the founders of Sunspot Pictures, and talked about their collaboration with Alfa insurance.

“Alfa came to us so they could keep their money local. They want to support their own communities in their home state,” Pennington said. “Tax revenues stay here, and we’re able to employ all these people you see here. This job has about 25-30 people, not counting the actors.

“That keeps the money in town, and these people don’t have to leave the state to have work,” he added, as he pointed to his film crew, and other employees like Dawn and her daughter.

Pennington and Brower started their Alabama-based film company 25 years ago.

The company is southern born and bred, and they film locally for companies on both the regional and national scale.

“It’s a nice place to live, and we can make money here. Why would we want to go to a big city?” Pennington said.

“Alfa is an Alabama company that was started in 1946 by farmers who couldn’t get fire insurance for their homes and barns,” said Jeff Helms, director of public relations for Alfa Insurance. “It really makes sense for us to try to do business with Alabama companies.

“Birmingham has a wealth of talented directors, producers and lighting people,” he continued. “The film community there is very strong, so we’ve been able to focus our filming in and around Birmingham. Columbiana is a great town to film in. We’ve been here before in 2011. We are glad to be back in Columbiana now to do some more.”

Pennington said Columbiana’s Main Street offered exactly what they needed when they sent out scouts to find locations.

It represented small towns across the state. Main Street, with its shops, were perfect for Alfa’s new string of commercials for home and auto.

He also said the city was easy to work with and welcoming.

Columbiana Mayor Stancil Handley responded to the visit with pride in his city.

“We are so fortunate to have a hometown like Columbiana,” he said. “It’s truly the crown jewel in Shelby County’s crown. We always welcome the opportunity to share our unique and beautiful city. We appreciate being chosen for the recent Alfa commercial.”