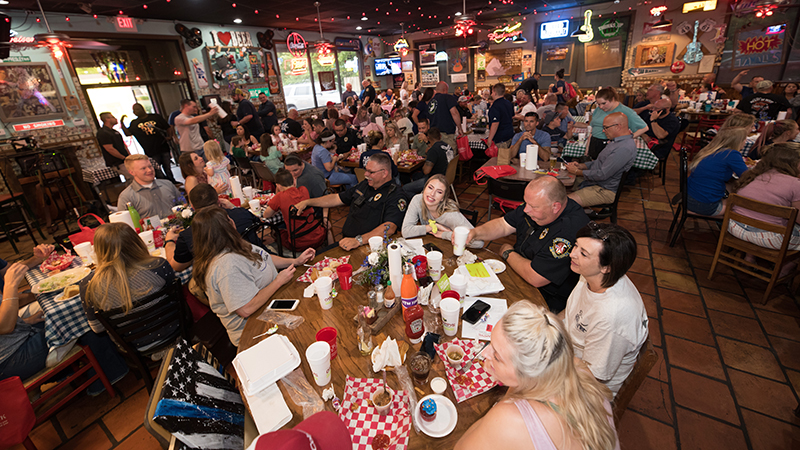 Alabaster police officers and their families enjoy a dinner in their honor at Champy’s restaurant off Alabama 119 on the night of June 11. (Reporter Photo/Keith McCoy)

ALABASTER –  Alabaster citizens were outside Champy’s restaurant standing watch as police officers were treated to a free dinner and more than $6,000 in prizes as a token of appreciation from the community on June 11.

This is the fourth-annual police appreciation dinner organized by Dena Bedsole and Kimberly Kielbasa, and the second to be held at Champy’s.

“The officers and their families give so much and they are pulled away from their families and put their lives on the line every day,” Kielbasa said. “This is just our way to say thank you.”

Through various anonymous donations the organizers were able to give away multiple cash prizes to the officers through a raffle, including 16 separate gifts of $500 and several smaller amount. Other prizes included gift cards, handcrafted flags made by Bedsole’s son, a new grill and hotel packages.

According to Kielbasa the response was so incredible that some individuals even showed up to the event with envelopes of money to give to the officers.

A featured speaker at the event was Stephanie Douglas, who recalled a terrifying event that was remedied through the various channels a 911 call follows, including police assistance.

“In Oct. 2017, I collapsed here at Champy’s and I was basically dead for five minutes,” she recalled.  “The people here in the restaurant jumped in and called 911 and did CPR. The third part in the chain of survival is an AED defibrillator, which Champy’s did not have.”

Douglas was present to present the owners of Champy’s with a new AED device so that they would be able to help anyone else that might unfortunately have a similar experience.

Sponsors for the dinner included Champy’s, the School for Amazing Kids and Cultivate Church.