COLUMBIANA – A Shelby County grand jury has returned a two-count indictment against a 35-year-old Alabaster man, upholding charges of first-degree sodomy and sexual abuse of a child, and he is now awaiting trial in Shelby County Circuit Court. 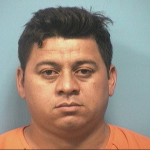 The grand jury upheld the charges during its May term against Carlos Edward Giron-Orantes, who lists an address on Redwood Drive in Alabaster.

Alabaster police arrested Giron-Orantes on Sept. 29, 2018, and charged him with the two crimes after officers responded to a report of sexual abuse involving a child younger than 12 and investigating the case.

According to Giron-Orantes’ arrest warrants, he allegedly forced the victim to perform sex acts on him and engaged in deviate sexual intercourse with the victim between Dec. 1, 2017, and Sept. 26 of this year.

“The Alabaster Police Department works extremely hard to protect children and seek justice on their behalf,” APD Det. Paul Johnson wrote in a statement at the time of the arrest.