From Alabama Boys State to the Marshall Space Flight Center, Jonathan Dates has set a high bar for his peers at Vincent Middle High School. 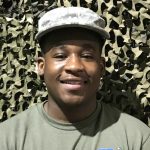 “I am so proud of this young man,” said Sgt. Maj. Mary Kyser, senior JROTC instructor, sharing that it is difficult to participate in back to back programs. “It really speaks to his dedication.”

The Alabama Boys State and Girls State are programs of the American Legion. The University of Alabama hosts both programs at different times during the summer. Being chosen to participate in this program is one of the highest honors granted to Alabama high school students as they are selected by the faculty, school-wide.

Teachers look for a student who exhibits strong morals, works hard, is motivated in both school and community activities and demonstrates strong leadership skills.

The American Legion espouses, “There is no better way to assure the survival of the country than to train young people in the ideals and objectives of American government.”

“I got to bond with other students—there were students from all over the state and we were all different,” Dates said. “It helped us learn how to bring our differences together and be one. It also helped me prep for college. I had to prioritize my time and we had to take care of ourselves, like it will be when I go to college.”

From Tuscaloosa to Huntsville, Dates joined his fellow JROTC Cadet peers at the Leadership Challenge Camp, funded by the United States Army and hosted by the Marshall Space Flight Center.

This program affords trainees an opportunity to apply leadership in a practical manner through hands-on experimental learning. According to Maj. Stanley Murrell, JROTC instructor, “The Cadets keep a rigid schedule and they are worn out when we leave.”

Explaining that to make the trip to Huntsville is a privilege, Murrell said, “There are limited spaces available so to be considered for this experience is an honor and it comes at minimal cost to the student thanks to our Army Contract.”

Dates will be a senior upon returning to Vincent Middle High School in August. When he graduates high school, he plans to attend Auburn University where he would like to march in the band. His goal is to become a computer engineer.

Jonathan Dates is another shining example of #Vincent Strong!