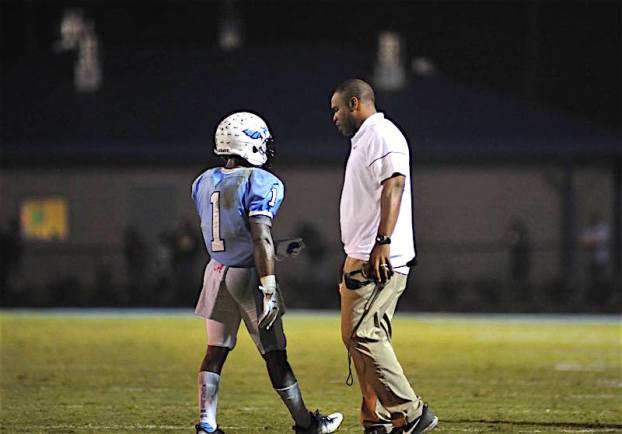 Andrew Zow was announced the new head coach at Bessemer City High School on Monday, June 10, leaving the Calera Eagles with a vacant head coaching job ahead of the 2019 season. (For the Reporter/Larry Dancy)

CALERA – Since 2012, former Alabama Crimson Tide quarterback Andrew Zow has been a head coach in Shelby County, but that all changed on Monday, June 10, when the former Calera head coach was named the newest head coach at Bessemer City High School.

After a 1-9 season at Calera in 2019, his worst as a head coach, Zow found a situation that might fit better for him when former Bessemer City head coach Derone Fagan was fired earlier this year.

The Tigers, who will be on their fourth head coach in four years, actually had an impressive season in 2019 going 7-5 and earning a spot in the second round of the playoffs, but after the AHSAA discovered Fagan and his staff allegedly held rule-breaking practices outside of allotted times, the program was put on probation and the entire staff was let go of their coaching duties by the school board.

Zow will step into a pretty good situation at Bessemer City. Since 2012, the Tigers have won at least five games every season except the 2017 season, including 10 in 2013, eight in 2015, seven in 2016 and seven in 2018. They have also advanced to at least the second round of the playoffs four times in the last six years.

It’s a sad departure to see for Shelby County, however, as Zow has called the county home since 2012 when he took over as Montevallo’s head coach.

As the Bulldogs’ head coach, Zow went 13-29 overall winning no more than two games in his first three seasons before then going 9-3 in 2015 and being named the Class 4A Coach of the Year.

That’s when the Calera job came open, and Zow decided to make his next move up the ladder inside the county. In his first two seasons at Calera, Zow led the Eagles to records of 8-4 and 7-5 and the second round of the playoffs in both seasons.

Then came the step up to the 6A classification. Not only did Calera move up to Class 6A in 2018, but stepped into the most difficult region in the state with opponents including Opelika, Wetumpka, Stanhope Elmore and Benjamin Russell.

The Eagles went 1-9 in a difficult season because of that transition.

With the move to Bessemer City, Zow will be in a slightly easier region in the 6A classification, but will still face a difficult test with opponents including Hueytown and Hillcrest-Tuscaloosa.

While the move on seemed like the right fit for Zow, and maybe the right thing for Calera as well, it leaves the Eagles with no head coach just a shade over two months away from the season.

Calera will being holding interviews for the job over the next week and should have a hire in place by Friday, June 21, it leaves the Eagles in an extremely difficult situation moving forward into the 2019 season.

The new coach will have very little time this summer to form the proper relationships and learn what he needs to about his team, so the hire will have to be made quickly and the new leader will have to hit the ground running.

Calera has made the playoffs six of the last seven years and will hope whoever takes over can take them back to at least that level if not a deep postseason run.

By ALEC ETHEREDGE | Sports Editor With three teams advancing to the state tournament, eight teams being ranked throughout the... read more