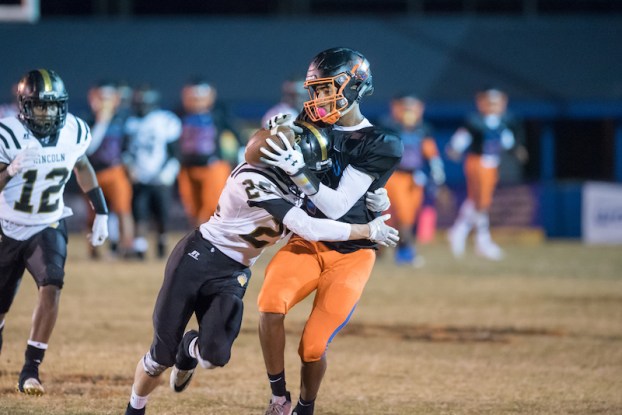 Montevallo’s J.J. Evans is one of the top recruits in the state and the country going into the 2019 football season after finishing second all-time in state history for receiving yards in a season last year. (Reporter photo/Keith McCoy)

With the 2019 football season now two months away, it’s officially time to start looking ahead to the excitement of Friday nights under the lights again, and more specifically the talent that will shine brightly under those same lights.

Over the last few years, football in Shelby County has taken off thanks to several Division I caliber players, and for the upcoming 2019 season, the county has not only some of the state’s top recruits, but some of the country’s top recruits for the classes of 2020, 2021 and 2022.

Of course, two of the names you’ve heard mentioned constantly over the last year are Calera’s Jayson Jones and Montevallo’s J.J. Evans.

Both are considered top 10 players in the state by every recruiting site and are committed to SEC schools.

A defensive tackle committed to the University of Alabama, Jones is considered the 84th best player in the country and a four star by ESPN. At Calera, he has played on both the offensive and defensive line, but his presence as a pass rusher and a big guy on the defensive side has caused a ton of problems, and has him poised for a big senior season to show he is ready for the next level.

Evans, who almost gave up football for good after his father passed away and didn’t start playing again until his sophomore season at Montevallo, really burst onto the scene during his junior year with the Bulldogs.

He quickly had several 200-yard receiving games and went on to finish second all-time in state history for receiving yards in a single season with 1,706, which was just 29 yards away from breaking the state record.

His recruiting quickly took off with SEC schools coming to look at him left and right during the 2018 season, and it has since led to him committing to Auburn University and head coach Gus Malzahn.

Also a four star, Evans is rated as highly as the fifth best recruit in the state by Scout.com, while ESPN has him as the sixth best player and Rivals.com the eighth best player.

He is rated as high as the 134th best player nationally and will be exciting to watch for the Bulldogs in 2019.

Howard, who just recently committed to Georgia Tech, is considered a three-star offensive lineman and the 37th best player in the state by ESPN, the 48th best player by Scout.com and the 42nd ranked player by Rivals.com.

Pettway came in and made a name for himself at Thompson during his junior season with the Warriors, taking advantage of current Alabama quarterback Taulia Tagovailoa’s arm.

He totaled 1,208 receiving yards and 17 touchdowns last season on just 64 receptions, which quickly gathered a lot of attention.

Going into his senior season, Yowe has been a star defensive back in the state for three years now. A three star that was at one point committed to Mississippi State, Yowe has opened his recruitment back up and has offers from Florida, Kentucky, West Virginia and Mississippi State, as well as others.

He is considered the 33rd best player in the state by Scout.com, and the 31st ranked player by Rivals.com and ESPN.

Pelham running back Dylan Peterson and Thompson athlete Tre Roberson are both players that will be juniors this season that have already had an impact in the county and will look to raise the bar this season.

Peterson was one of the best running backs in the county last year as a sophomore carrying the ball 83 times for 538 yards and seven touchdowns in just eight games.

Going into his junior season, Peterson should be a 1,000-yard back if he stays healthy, which will really help him take off. According to Scout.com, he is considered the 25th best player in Alabama for the class of 2021.

Roberson is also highly rated in the state as the 34th best player in the class of 2021. After moving from Homewood, Roberson suited up for the Warriors last year, but dealt with injury for much of the season. He did, however, come back late in the season and spent time on both defense and offense having an impact.

This year, he is expected to play a lot at receiver, and actually led the team in receiving during the spring game with more than 100 yards.

The final two players that you’ll want to keep a close eye on from a recruiting perspective this season are two rising sophomores in Jeremiah Alexander and Evan Smith.

Alexander, a defensive end at Thompson, and Smith, a quarterback at Oak Mountain, are two of the most exhilarating players to watch in Shelby County.

While the recruiting rankings haven’t been compiled for the class of 2022, Alexander could possibly end up being the best player in the state and one of the top players in the country if he continues to play as well as he did last year.

As a freshman in the most physical region of football in Alabama, Alexander totaled 46 tackles, including 16 tackles for loss and six sacks. Standing at 6-foot-2, 210 pounds with three years of high school football left, he has the highest ceiling of any player in the county right now.

Just like Alexander, Smith also had a stellar freshman season facing off against several Division I defenders from the quarterback position. His speed allowed him to break off several lengthy touchdown runs last year as he totaled 755 rushing yards and 861 passing yards with a combined 15 touchdowns.

In Class 7A, Region 3, those are good numbers for a senior, much less a freshman in his first experience. If his game continues to improve, he will be a dangerous threat to any defense he faces.

By ALEC ETHEREDGE | Sports Editor With three teams advancing to the state tournament, eight teams being ranked throughout the... read more