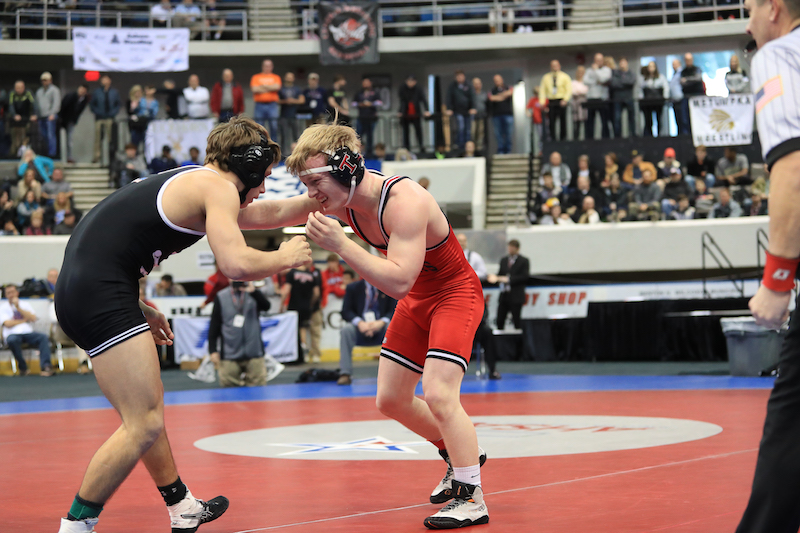 Thompson had four wrestlers from its 2018-19 team that were named All-Americans by Wrestlingusa.com, including Gabe Hixenbaugh, above. (For the Reporter/Dawn Harrison)

While the Thompson Warriors have gotten accustom to winning state championships, the 2018-19 season was just a little bit more special than the rest thanks not only to winning their second consecutive title and seventh in the last nine years, but also thanks to winning their 500th dual match in school history.

In a list released by Wrestlingusa.com, Sam Latona, Gabe Hixenbaugh, Chandler Akins and Dylan LeSueur were all named All-Americans for their efforts during the championship-winning season.

Latona and Hixenbaugh both represented Alabama as All-American team members, while Akins and LeSueur were named All-American Honorable Mention members.

Latona has posted an overall record of 132-12 with 69 pints at Thompson and won a state championship as well. He is also doing his part in the classroom with a GPA of 4.42.

Hixenbaugh has been one of the biggest keys for the Warriors for several years now with five state championships and an overall record of 244-18 with 94 pins.

In this year’s state championship meet, Hixenbaugh picked up pins in his first two matches before going on to win the title in the 138-pound weight class via technical fall thanks to a score of 17-2.

Akins and LeSueur also closed out special careers with Thompson in state-championship fashion to earn a spot on the All-American team.

Akins wrestled in the 126-pound weight class and went up against county opponent Sullivan Tipton of Oak Mountain. In the title match, Akins did a great job of keeping Tipton off the board to pick up a 6-0 win for the championship.

LeSueur’s impressive showing came in the 113-pound weight class thanks to pins in his quarterfinal and semifinal matches, before going on to control the championship match for a 14-2 victory.

All four of those athletes have been a part of Thompson’s historic championship program, and will be remembered by the marks they left behind.