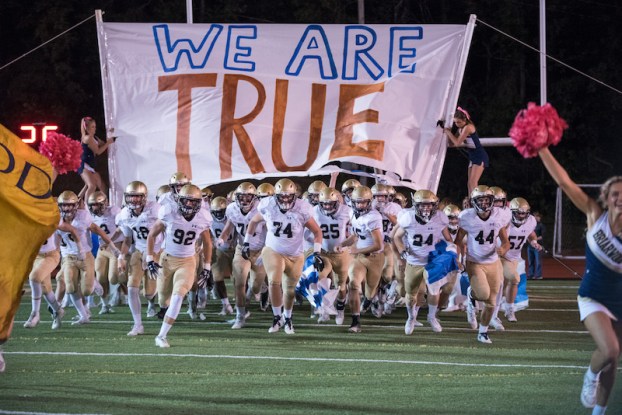 A look at Briarwood’s 2019 football schedule

There will be a lot of unfamiliar territory and a lot of questions surrounding the Briarwood football team during the upcoming 2019 season.

Can the Lions continue dominance without Fred Yancey? Can they respond to last year’s early playoff exit? Can they find an offensive rhythm? Can they bounce back and win the region again? What will the team look like under new head coach Matthew Forester?

While all of those questions will be answered in due time, Briarwood will always be one of the favorites in the 5A classification.

After a 9-3 season in 2018, the Lions lost just one region game by a final of 21-7 to Ramsay and lost just two regular season games with their other loss coming in a difficult 14-7 overtime loss to a good Class 6A Hartselle team on the road.

While the offense struggled mightily at times, the defense continued to prove itself as one of the best, and with Forester now being the head coach after running the defense the last several years, he’ll bring his defensive mentality to both sides of the ball.

That should have players and fans excited about what’s to come in 2019, as should another manageable schedule that features six home games in their first eight contests and only four road games the entire season.

Last year, the Lions had a difficult start to the season with five of their first six games on the road, but this year the schedule flips in their favor.

The Lions’ first game of 2019 will come on Friday, Aug. 30, at home against rival Chelsea. Last year, that game started on a Friday night, but was forced to Saturday due to weather, as Briarwood went on to pick up a 19-6 season-opening victory. The Lions have now won two games in a row against the Hornets, meaning Chelsea will be on the hunt for some early redemption in 2019.

Briarwood will follow that with its first region matchup of the season against Pleasant Grove. The Spartans were one of the Lions’ toughest opponents last year, but Briarwood pulled out a 10-6 victory thanks to that tough defense.

Pleasant Grove, however, went on to finish the season 9-3 overall with a berth in the second round of the playoffs. That will be a good early test to see how much Briarwood has improved offensively, and what the Lions’ region fate might be.

A week later, the Lions will take on Woodlawn in another home region matchup, and a game Briarwood won 46-0 last year. If they can beat Pleasant Grove, the Lions should be 2-0 in region play following this matchup with Woodlawn on Sept. 13.

That will be followed by Briarwood’s first road test, and it will be a difficult one. In what has become a rivalry in recent years with several great games, Briarwood will travel to take on region foe Wenonah on Sept. 20.

Last season, Wenonah couldn’t find any room against the Lions’ defense, which led to a 29-0 victory for Briarwood, but this season, it won’t be surprising if these two get back to their now infamous tight contests.

Briarwood will then get a rematch with Hartselle at home on Sept. 27. Last season, Hartselle was one of the top 6A teams in the state, but the Lions didn’t fold and battled to overtime thanks to their defense forcing a 7-7 tie at the end of regulation. If Briarwood’s offense is improved this year, they’ll have a chance at redemption.

A week later, the Lions will get their fifth home game in six contests when they host region foe John Carroll. It’s a game Briarwood won 42-12 last year, and should have no problem with again in 2019.

The rest of the way, the Lions will face three road games in their final four games of the season, including two Thursday night games against Parker, Oct. 10, and Fairfield, Oct. 24.

Both of those matchups will be region road matchups. Briarwood beat both last year by a combined 67-7.

The lone home game the rest of the way will be the key contest for claiming the region title.

On Friday, Oct. 18, Briarwood will play host to the Ramsay Rams, who stepped into the region last year and stole the crown away from the Lions thanks to a 21-7 victory in their head-to-head matchup.

With that win, the Rams came in and snatched the region championship from Briarwood and went on to finish the season 11-2 with a berth in the third round of the playoffs. While every game is important, there will definitely be a desire to redeem that loss in 2019.

The final game of the season for Briarwood will come on Friday, Oct. 30, with a road matchup against Hueytown. It’s a game the Lions won 31-13 against a ranked 6A team last year to give them confidence heading into the playoffs.

Looking at Briarwood’s schedule, it’s unlikely this year’s team won’t at least make the playoffs. The bigger question will be how far can they go after last year’s exit in the second round with a 26-0 loss to Vigor, who lost the state championship by one point.

FROM STAFF REPORTS CHICAGO, Ill. — After setting state and national records in track and field, and sprinting by everyone... read more