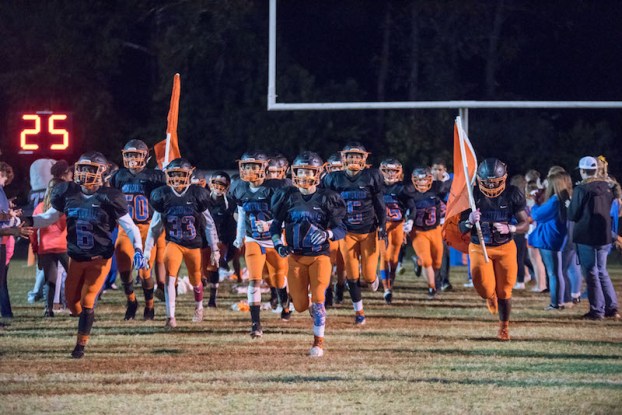 Montevallo will look to duplicate the success it had in 2018 with a very similar schedule during the upcoming 2019 football season. (File)

The 2018 football season was a historic one from a production standpoint for Montevallo after the Bulldogs put one of their best offenses in school history on the field setting a team record with 435 points scored and going 9-2.

Despite a first-round playoff exit to Andalusia by a final score of 28-8, the Bulldogs maneuvered the regular season artistically as one of the most exciting teams to watch, and now in 2019, the Bulldogs bring back the fuel of wanting to redeem that playoff loss with a similar regular-season slate.

Yet again, Montevallo’s schedule will get off to a difficult start with three of its first four games taking place against current Class 5A teams, which is a classification higher than the Bulldogs, before then taking on the likely favorite in their region in week five.

In 2018, the Bulldogs made it through that five-game stretch with a 4-1 record thanks to a 4-0 start to the season with three games in a row on the road, while this year, they’ll get three in a row at home as well as two Thursday night games.

The season will start on Friday, Aug. 23, when Montevallo hits the road to take on Class 5A opponent Marbury. The Bulldogs won last year’s matchup 36-27 against a Marbury team that went on to finish 0-10 averaging 11.8 points per game offensively and giving up 39.5 points per game defensively. It’s hard to imagine Marbury making up enough ground to be able to redeem that loss.

Following their opener, the Bulldogs will play a special first home game of the 2019 season on a Thursday night when they take on what should be an improved Shelby County Wildcats team on Aug. 29.

Montevallo won last year’s game 22-12 on the road, and the Wildcats will be looking for redemption this season. Shelby County finished 3-7 last year, but should be better this season, which will create for a fun atmosphere in a county rivalry early in the season.

With an extra day of preparation, the Bulldogs will play their second of three straight home games on Sept. 6, when they take on their first region opponent in Dallas County. Montevallo went on the road last year and dominated Dallas County 41-0, as the Hornets went on to finish the season with a 1-9 overall record. The Bulldogs should be a heavy favorite again this season.

But no other game matched the 64 points Montevallo put up against Jemison in a 64-41 victory. Jemison’s defense gave up 40.7 points per game last year, and with Montevallo bringing back most of its offensive talent, the Panthers will have their hands full again this year.

Then comes the test of the year.

On Friday, Sept. 20, Montevallo will hit the road for their second region game of the season to take on vaunted American Christian Academy. Last season, the two teams competed in a game that featured a combined 124 points with the Patriots coming out on top 70-54.

That marked Montevallo’s only loss of the season, but also a game the Bulldogs didn’t give up in after a large deficit early. American Christian went on to win the region championship and finished the regular season 10-0, before advancing to the third round of the playoffs and losing 21-19 in a heartbreaker.

The Patriots will again be the favorite to win Class 4A, Region 3, but the Bulldogs will be out for redemption after last year’s loss.

Montevallo will then get a much-needed week of rest on Sept. 27, before then returning home to take on region foe West Blocton on Oct. 4. It’s a game the Bulldogs won 49-28 last season.

Over the next three weeks, Montevallo will have three consecutive region games, including two on the road.

On Oct. 11, the Bulldogs will travel to Sumter Central, which will be followed by a home game against Sipsey Valley and another road game against Greensboro to close out region play.

The Bulldogs will then close out the regular season on Friday, Nov. 1, with a road game against Lincoln. The Golden Bears went 7-4 last season, but Montevallo was able to pick up a 42-24 win against a good team.

There are definitely winnable games on the schedule this season, but also chances to take a step back. With so many talented players on this year’s team, a deep playoff run is possible, but they’ll have to come together with that one goal in mind.

A look at Briarwood’s 2019 football schedule

By ALEC ETHEREDGE | Sports Editor There will be a lot of unfamiliar territory and a lot of questions surrounding... read more