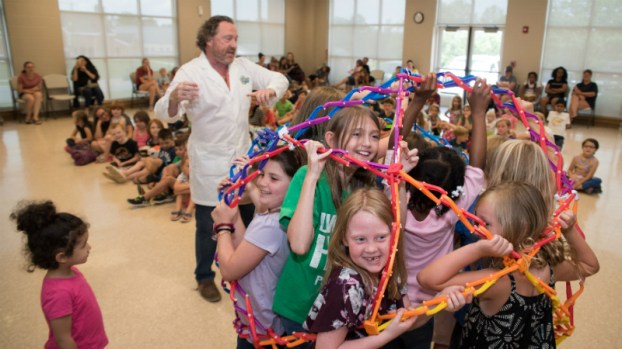 Mr. Bond of the Science Guys teaches about space

CHELSEA – About 75 children learned space-themed science lessons through an engaging, hands-on presentation at the Chelsea Community Center on Wednesday, June 19, during the city’s summer reading program.

The program, A Universe of Stories, began June 12 and continues through July 24.

Participants were entertained on June 19 by Keith Trehy, also known as Mr. Bond of Mr. Bond’s Science Guys, who noted that he got lost traveling to the community center despite being from Chelsea (the one in London, United Kingdom).

“Now I’m back where I started,” Bond said, followed by, “Are you ready for some science?!”

Several volunteers got inside a large, expandable, round device representing earth and then were asked to tilt on an axis, rotate and revolve around an imaginary sun.

The 2019 science show includes experiments about life in space, rocket propulsion, centrifugal force, planets, and orbits. Kids and adults were invited to participate in the presentation including over a dozen hands-on science experiments and explosions.

To register for the summer reading program, visit ChelseaLibraryonline.com and register on Read Squared.

Once registered, participants can log minutes through the Read Squared app. Minutes read will be logged this year instead of number of books. The more minutes spent reading, the more prizes can be earned in addition to chances to win the grand prize at the end of the summer.

Upcoming programs include Lew-E’s UFO Show on June 26, Herp Journey presented by the Alabama 4H Center on July 10, Tommy Johns Magician on July 17, and Storytelling and Face Painting on July 24.

Children do not need to be registered in the summer reading program in order to attend the programs.

All programs are at 2 p.m. at the Chelsea Community Center.

Also, Slime Lab is offered for children entering kindergarten through fifth grade. The lab is held at 1 p.m. and 3 p.m. on June 27, July 11 and July 25.

Space is limited to 15 children per session, so register on the library website of by calling the library at 847-5750.

Movies are shown at the Community Center at 1 p.m. each Tuesday during the summer.

The schedule includes Fantastic Beasts: The Crimes of Grindelwald on June 25, Small Foot on July 2, BumbleBee on July 9, Spiderman into the Spiderverse on July 16, and Lego Movie 2: The Second Part on July 23.

FROM STAFF REPORTS CHICAGO, Ill. — After setting state and national records in track and field, and sprinting by everyone... read more