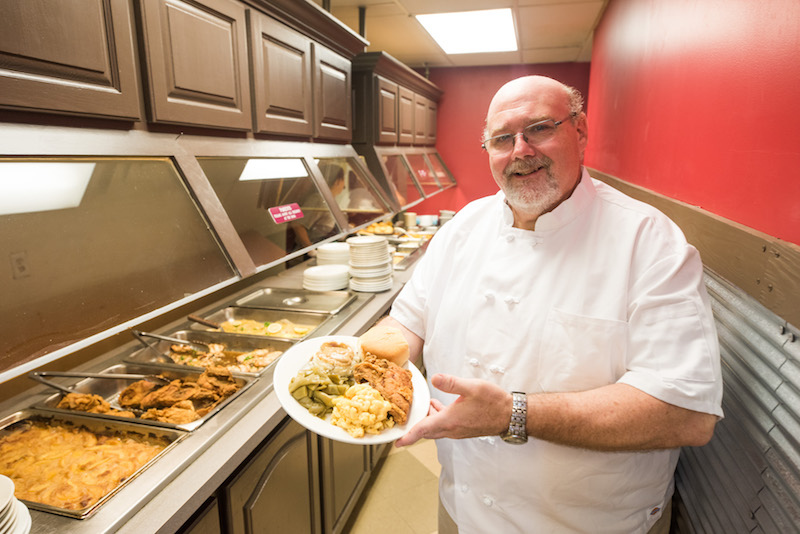 “Come for the comfort, stay for the soul,” said owner John “Johnny” Naro, the restaurant’s namesake and head chef. “That’s our whole mission here: We want you to have comfort and soul. We’re doing Southern-style cooking, such as chicken and dumplings, chicken pie, meatloaf and real country-fried steak.”

Naro has worked in the food service industry for 36 years, starting at Pioneer Cafeteria and followed by stints at the Birmingham racetrack (where a coworker created the cartoon now featured on the Fat Johnny’s logo), and in Baptist Health Systems as an executive chef for the majority of his tenure.

He also has worked in little league ballpark concessions in the Birmingham area for 24 years.

“I kept myself busy in other areas, always trying to learn from other chefs and things of that nature,” Naro said. “I always tell people culinary arts is what we are. It’s how you interpret that dish. That’s where the art of all this comes through.”

Naro’s love of cooking traces back to his childhood, when he helped his parents prepare meals for organizations in which they were involved, such as the Knights of Columbus and Elks Lodge.

Naro said encouragement from people like Benard Tamburello, who years ago operated the former Bernie’s restaurant in the same space Fat Johnny’s now occupies, helped him make the decision to realize his longtime dream of opening a restaurant.

“I called him (Tamburello) and said, ‘I think I’m ready,’” Naro said. “The stars were lining up. We knew Bernard had this place and was very successful.”