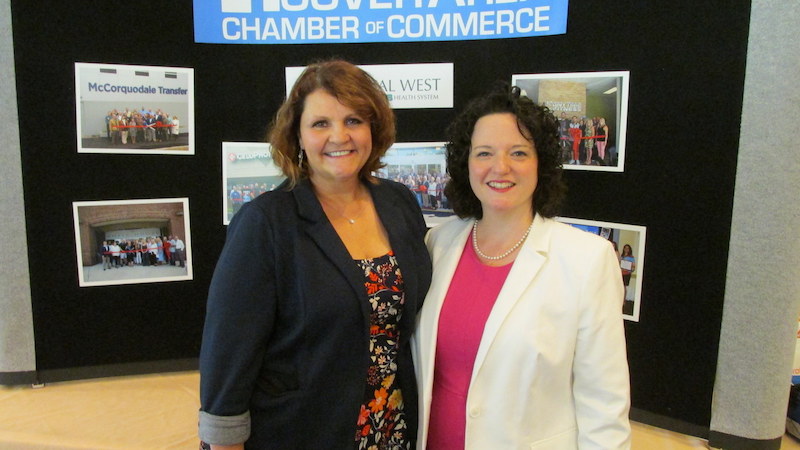 By Michael J. Brooks/Special to the Reporter

Main Street Alabama President Mary Helmer said her goal is to bring “downtown back to life.”

Helmer was guest presenter for the Hoover Area Chamber of Commerce luncheon on June 20. She noted it’s a new day for downtown and historic districts throughout the state.

“As this group knows, retail is changing,” she said. “The stats say that 500 malls are closing every year. But the downtown areas ‘tug at our heart strings’ and have an appeal. We find that revitalized areas can produce 30 percent more jobs and increase the tax base 40 percent.”

“We called this ‘urban renewal’ 40 years ago but revitalization is a newer concept,” she said.

Among the newest cooperating communities are Enterprise, Headland, Calera and the Fourth Avenue section of Birmingham.

“The first step is organization and fundraising,” she said. “We have to get on the same page and sing the same song. This involves building relationships and learning to work together. Montevallo has been in our program for four years and they’d done a great job of working together to make downtown more inviting.”

Helmer explained that Main Street is supported by the business community. Parent organizations pay $7,500 for the first year, $5,000 for the second year, $3,000 for the third year and an annual fee of $1,500 thereafter.

“These fees help us evaluate, design and plan,” she said.

“The small community of Marion is economically challenged, but they’ve been creative,” she said. “Local artists designed exterior window coverings for a vacant building with broken windows. The coverings are portraits of local civil rights heroes. Now the building has been sold. Other organizations have created murals and trails. New designs create a feeling of community and uniqueness.”

Another step is promotion, she said.

Helmer said a university community in another state found students weren’t supporting the downtown area, so businesses instituted a “Welcome Back Block Party” to acquaint new residents with the nearby attractions.

“This is the kind of creative energy we’re after,” she said.

Another step is celebrating economic vitality.

“We promote local businesses and then we work to recruit new businesses,” she said. “Our website lists our community projects and the results they’ve seen every month.”

“This latter group has their ‘toe in the water’ and have taken the first step of cooperation and revitalization,” she said.

“Our business area is really Highway 31 rather than downtown, but Main Street has worked with areas like ours before,” she said. “We want to stay on the cusp and fuel the economic engine in our community, too.”