Cara, Echosmith, AJ Mitchell and Stephen Puth are set to perform in 103.7 The Q’s Just Show Up Show, presented by Dr. Bobby F. Shunnarah at Montevallo Family Dentistry, on Aug. 1 at 7 p.m. in Montevallo’s Orr Park, according to a Facebook announcement shared by 103.7 The Q and the city of Montevallo. 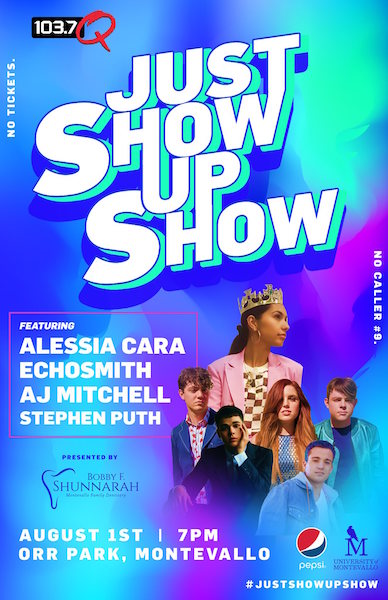 “We’re so excited to finally announce this awesome event,” the city’s Facebook post read. “Many cool things to come.”

Ontario native Cara won Best New Artist at the 2018 Grammy Awards. She received four JUNO Award nominations in 2016, including a win for Breakthrough Artist of the Year; a tour with Coldplay; a performance with Taylor Swift after which Taylor proclaimed herself an Alessia fan; the cover of Billboard Magazine’s Grammy issue; and a 2016 AMA nomination for New Artist of the Year.

Echosmith, a Los Angeles alt-pop band of four siblings, performed at the Just Show Up Show at Pelham Palooza in 2015. The group is known for their hit songs “Cool Kids,” “Bright” and “Over My Head.”

Mitchell, a teenage singer-songwriter from Illinois, rose in popularity after covers and original songs he posted on Instagram expanded his fan base to more than one million followers.

Puth is making a name for himself with tracks like “Look Away,” his most recent release on which he collaborated with his brother, singer Charlie Puth.

The Just Show Up Show is free and open to the public on a first-come, first-served basis.

People of all ages are welcome to attend.

Pepsi VIP tickets are $40 and include a meet-and-greet and picture with all of the artists, skip-the-line passes and complimentary refreshments.