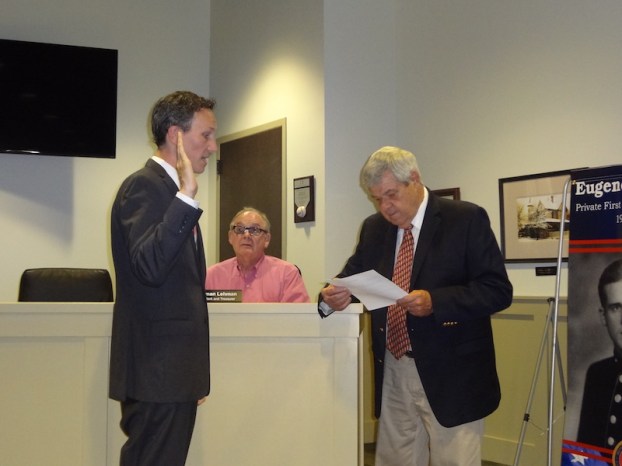 After being appointed May 28 to fill the vacant Montevallo City Council District 5 seat, Arthur Herbert, left, is sworn in by Judge Bruce Green at the June 10 City Council meeting. (Reporter Photo/Emily Sparacino)

MONTEVALLO – The Montevallo City Council made decisions in a June 10 regular meeting regarding city parks and boards.

The council approved for a dog park to be located at Shoal Creek Park, the city’s new park off Alabama 119.

The city was set to submit a grant for the dog park, which will accommodate small and large dogs, by June 19.

Cost and council members Jason Peterson and Arthur Herbert, who was sworn in as the new District 5 councilman June 10, voted in favor of Shoal Creek Park as the site of the dog park. Nix voted against the motion, and council members Tiffany Bunt and Councilman Willie Goldsmith abstained.

Regarding boards, Bill Glosson declined a nomination to the County Board of Equalization, leaving the position open.

Cost said the city needs to appoint someone to the position by Aug. 15.

The council voted in favor of appointing Peterson to the city’s Water and Sewer Board.

In other business, the council took no action regarding a proposed contract with the Regional Planning Commission of Greater Birmingham to facilitate the update of the city’s comprehensive plan starting in October.