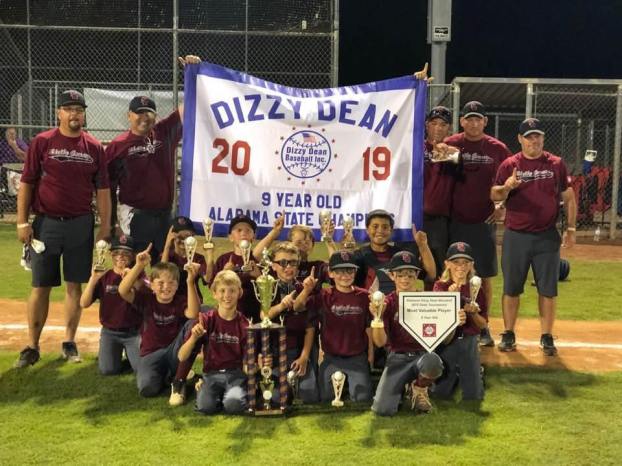 The Shelby County 9U baseball team fought out of the loser's bracket to take down Chelsea twice for the Dizzy Dean State Championship. (Contributed)

MADISON – In a redemption story normally slated for the likes of collegiate or professional sports, a team full of baseball 9-year-old baseball players stepped up to the plate and pulled off an incredible feat on Tuesday, June 25.

For the second year in a row, the Shelby County and Chelsea 9U baseball teams squared off for the 9U Dizzy Dean State Championship with Chelsea having won last year’s 8U title over Shelby County, but this year, the Wildcats’ 9U team was ready for redemption.

Last year, Chelsea entered the finale of the tournament with a perfect 4-0 record in the state tournament, while the Wildcats lost to the Hornets to drop to the loser’s bracket before bouncing back to earn a rematch against Chelsea in the championship series.

Having lost once already, Shelby County needed to win two games in order to take home the title, but failed to do so and dropped the first game to go 0-2 against Chelsea in the tournament, giving them the title.

This season, both were back in Madison as the only two teams from Shelby County to make it that far in the 9U league, and the similarities to the previous season were almost identical, aside from the ultimate outcome.

Both All-Star teams were every bit as good this year as they were a season ago. Early in bracket play, the two teams started out perfectly with Shelby County posting a 2-0 record and Chelsea a 3-0 record.

That inevitably led to the first matchup between the two, which yet again, Chelsea was able to claim to move on to the championship in the winner’s bracket.

At that point, it seemed as if Shelby County was headed down the exact same path to the previous year, but the team that has been playing together since the age of six stepped up and put the losses to Chelsea behind them.

They went on to take down Northport in an elimination game, which led to Shelby County earning another spot in the championship against Chelsea.

In the exact same situation to a year ago, Shelby County was in the position of having to beat the only team that had beaten them twice to take home the title.

This time around, however, Shelby County was motivated and it showed. They went on to win game one 15-1, leaving no doubt in earning a spot in a winner-take-all game directly after.

While the game ended up being slightly closer, Shelby County’s team had come so far and didn’t want to see the title slip away for the second year in a row, as they stepped up to pick up a 7-2 victory for the Dizzy Dean Championship.

The win capped off a 5-1 run for Shelby County in the tournament, while Chelsea finished at 4-2.

By SETH HAGAN | Special to the Reporter HOOVER – The sound of a hundred basketballs dribbling simultaneously in late... read more