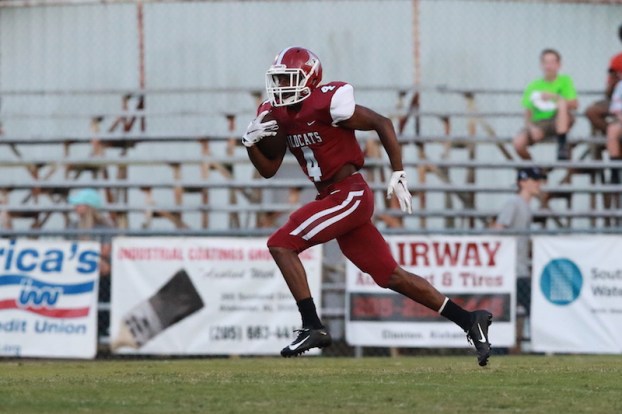 The Shelby County Wildcats will head into the 2019 football season looking to manage a schedule that could have led to more wins a season ago. (File)

Despite Shelby County’s 3-7 overall record in 2018, the product on the field wasn’t as bad as the record reflected, and now that the Wildcats are out to prove that with a similar slate of games set for the upcoming 2019 football season.

That not only showed that the Wildcats could have easily had a winning record and a spot in the playoffs, but showed that they got better as the season went along, and with several players back on this year’s team, that should carry over into the upcoming 2019 season.

Shelby County will open the season on Friday, Aug. 23, with a home game against Class 4A Childersburg. Last season, the Wildcats fell 13-0 as early-season offensive woes killed them.

That will mark one of just two home games in the Wildcats’ first six games of the season.

Following the opener, Shelby County will hit the road for two consecutive matchups, including a non-region Thursday night matchup with county rival Montevallo on Aug. 29, followed by the region opener at Chilton County on Sept. 6.

Last season, the Wildcats competed against Montevallo, but went on to lose a tight game 22-12 after leading early. Against Chilton County, however, the offense continued to struggle as Shelby County fell 34-0 to bring its point total through three games to 12.

Getting off to a fast start offensively this season whether they start 3-0 or 0-3 is key to the rest of the season with winnable games down the stretch.

On Friday, Sept. 13, Shelby County will return home for a region matchup with Bibb County. Last year, that marked one of the Wildcats’ closest losses, falling by a final of 30-24 on the road.

SCHS will follow that with a two-game road trip to Marbury and Moody, which marked the team’s first two wins last season. Marbury will mark a region test, but last year, that gave Shelby County a boost offensively posting 44 points, which was more than the Wildcats had scored combined in the first four weeks of the season.

Moody won’t be a region opponent, but will give the Wildcats a chance to win two games in a row again after taking down the Blue Devils 28-20 last year, which can help build momentum for a closing stretch featuring three consecutive region games.

After their trip to Moody, the Wildcats will return home on Friday, Oct. 4, for a matchup with the always difficult Demopolis, who won last year’s matchup 40-12. As a strong contender to win the region title, it will be a tough test for Shelby County.

That will be followed by the defining stretch of Shelby County’s season.

Following a bye week on Oct. 11, Shelby County will travel to Tuscaloosa to take on Central-Tuscaloosa, before returning home a week later to host Jemison.

Last season, the Wildcats lost both games by nine points or less falling to Central 50-44 and to Jemison 53-44. The offense had no problem during either of those weeks, but the defense struggled.

Losing those two tight games led to Shelby County missing the playoffs, and this year, a playoff spot will likely be on the line yet again.

Shelby County will close out the regular season on Friday, Nov. 1, with a home game against St. Clair County. Last year, the Wildcats won that game 48-33 to finish the season with a win and three consecutive games scoring at least 44 points.

If the offense shows up scoring 40-plus points to start this season, the Wildcats shouldn’t have nearly as much trouble maneuvering through the schedule as they did a season ago.

By ALEC ETHEREDGE | Sports Editor MADISON – In a redemption story normally slated for the likes of collegiate or... read more