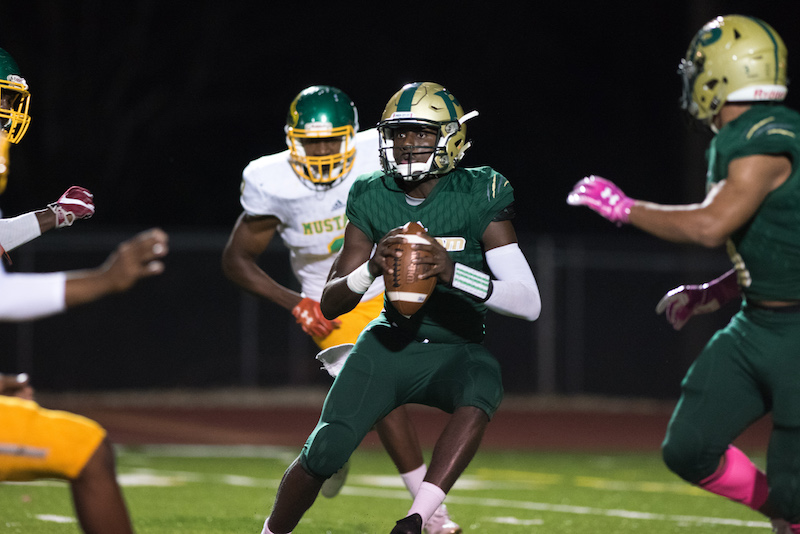 Pelham had its most successful season under head coach Tom Causey in 2018, and will now hope the 2019 schedule features even more wins. (Reporter photo/Keith McCoy)

The Pelham football program is on the rise, but honestly, it’s probably one that is kicking itself following a successful 7-4 campaign in 2018. How can you kick yourself after a successful season? Well, the Panthers were as talented as they’ve been under head coach Tom Causey, but lost games to Minor and Jackson-Olin that easily could have been won and led to a 9-1 regular season and a much better seed heading into the playoffs.

Instead, they were matched up with a good Hartselle team in the first round of the playoffs, which led to a 35-7 loss and an early exit from the postseason.

While the Panthers will lose 12 seniors from their most experienced team under Causey, they’ll also return several key players, including an impressive running back in Dylan Peterson and a talented quarterback in Xavier Lankford.

There will be a ton of question marks surrounding the team, but with a schedule that sets up well again and a region that only has Jackson-Olin and possibly Homewood as teams that should definitely make the playoffs, the Panthers will have every opportunity to be successful again this season.

After tasting last year’s success, this year’s squad is hungry for more of it, and Pelham’s program is in the best situation it has been since splitting with Helena.

The 2019 season will start off much friendlier for the Panthers this season thanks to four home games in their first five contests, and it’s a slate they’ll need to go 4-1 in to prove they have what it takes to be a legitimate contender.

Pelham will open the season on Friday, Aug. 23, with a home matchup against county foe Calera for the second year in a row.

Last season, the Panthers overcame a 21-0 deficit early in the game, before going on to win 45-24. With the Eagles making a late coaching change, Pelham should be favored again in that game to start the season.

A week later, Panthers will play its second of three consecutive home games to kick off the season when they host Bibb County. After scoring 45 in the opener last year, Pelham went on to put up 42 more points against Bibb in a 42-12 victory. That success should be duplicated in another 2-0 start this season.

Then, the first true test of the season will come to Pelham on Friday, Sept. 6, when the Homewood Patriots pay a visit for the first region game of 2019

Last year, Pelham struggled to get that successful offense off the ground against a good Homewood defense and fell 27-7.

A game that has been traditionally close in recent years, the Panthers should be in the game, and a win would be the perfect way to start region play with the next three region tests being winnable as well.

Pelham’s first game will come on Sept. 13, when the team travels to Minor in a game that is arguably just as important or more important than Homewood. Whether they win or lose against the Patriots, this is a game the Panthers have to win this year after last season’s 28-21 loss.

If they can win those two games this season, there is a chance Pelham will go into the Jackson-Olin game later in the season a perfect 4-0 in region play.

Following the trip to Minor, Pelham will return home on Friday, Sept. 20, to take on Chelsea. It marks a game that was too close for comfort for the Panthers last year with a 46-42 victory. They should be favored to win that game again this season, but Chelsea will be improved and will keep it close again.

Pelham will then get a break from region play on Friday, Sept. 27, with a road matchup against 7A county foe Oak Mountain. The Panthers put together a great game plan in that game last season to destroy Oak Mountain by a final score of 52-21.

The Eagles won’t let that happen two years in a row, and will be better this year, but it should be a fun, tightly contested game between two talented opponents again in 2019.

Pelham will jump directly back into region play on a short week of rest when they host Carver-Birmingham on Thursday, Oct. 3.

The Panthers won that game 28-6 a season ago, and should pick up a region win again this year.

That contest, however, will be followed by three consecutive road games to end the regular season, including the toughest matchup on the schedule a week later in another Thursday night tilt against Jackson-Olin on Oct. 10.

In last year’s matchup with the Mustangs, Pelham was inside the 5-yard line set to take the lead, before a fumble led to a long return for a touchdown that ended up instead putting the game away for Jackson-Olin.

The Panthers will be out for revenge this year, but it won’t be easy with the Mustangs having several top players back this season.

Following that game, the Panthers will hit the road again for two more games to close out the regular season when they take on Northridge and Helena on Oct. 18 and Oct. 25, respectively.

The Panthers won both games last season, taking down Northridge 45-28 and Helena 37-7.

If Pelham does make the playoffs, it will go into the postseason with a week of rest thanks to a bye week on Nov. 1.