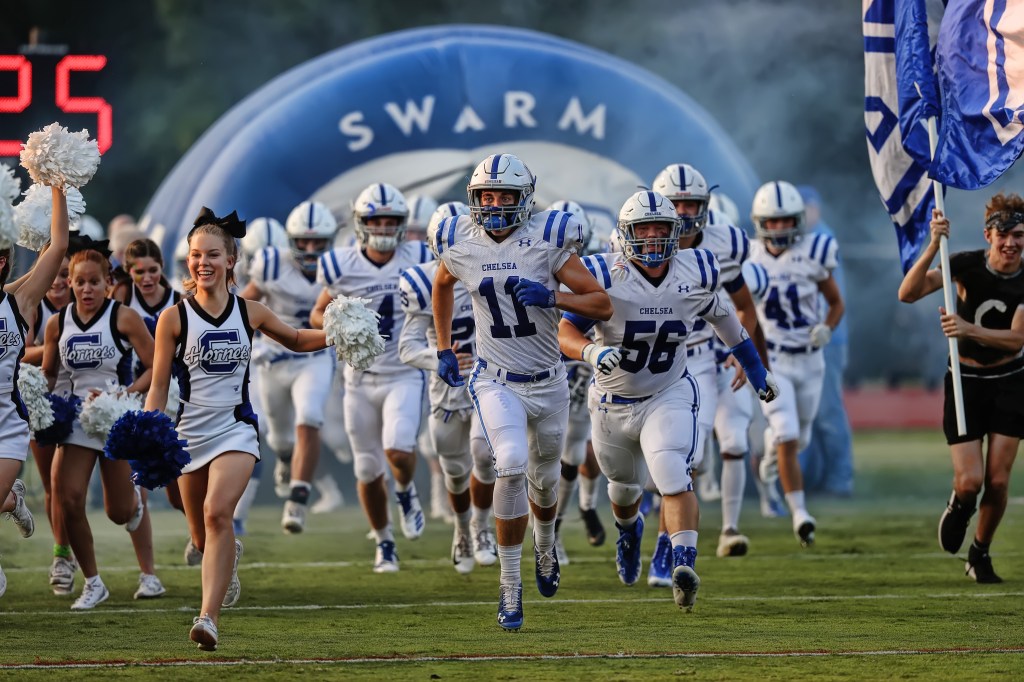 The Chelsea Hornets will look to improve on last year’s 2-8 record during the 2019 season after several tightly contested games in 2018. (For the Reporter/Cari Dean)

While 2-8 may seem like a disaster, the Chelsea Hornets were on the verge of a break through under first-year head coach Dustin Goodwin in 2018 thanks to five losses by 13 points or less, four by seven points or less and three by four points or less.

Now, heading into the 2019 season, Goodwin and the Hornets will have to figure out a way to win those close games, but the schedule sets up similarly this year, which should allow the Hornets to be in just as many games as they were a season ago, if not more.

The positive is right off the bat with three of the Hornets’ first four games taking place at home, but the negative is also in the first five games of the season, as it marks the most difficult stretch they’ll face.

Chelsea will kick off the 2019 season on Friday, Aug. 23, against the Oak Mountain Eagles in a rivalry rematch that the Eagles won 42-9 last year. As a Class 7A team, Oak Mountain holds an advantage in the game, and is 6-1 against the Hornets all time.

At that point last year, the Hornets were still feeling things out, which led to the lopsided loss to a team that finished 2-8 overall. They’ll be more competitive in this year’s contest, but Oak Mountain is also better than they were a year ago.

That will lead into a second county matchup in a row a week later against the Briarwood Lions, marking Chelsea’s first road game of the season. All-time, the Hornets are 9-21 against the Lions, but they hold the classification advantage and are 2-2 in the last four games.

Briarwood has won the last two games in a row by finals of 19-7 and 19-6, but that shows the Hornets are close. They’ll be taking on a new coach in Matthew Forester, which may help them out, but the game will ultimately come down to which offense has improved the most.

Those first two games will be non-region games, but on Friday, Sept. 6, the Hornets will play host to Carver-Birmingham for their first region contest of the season.

This was one of their four-point losses last year, falling by a final of 28-24. This year’s team has the potential to make the playoffs, and in order to do so, this matchup will be a must win with what looms the next two weeks.

What looms is defending region champion Jackson-Olin, who is likely the favorite to win the region title again this year with the return of several key star players. Last season, Jackson-Olin pulled off a 22-0 shutout against the Hornets.

While that’s not a blowout, the Hornets struggled to find any offensive rhythm, which may be tough against the Mustangs’ defense again this year.

That will be followed a week later on Friday, Sept. 20, by a road trip across the county to take on rival Pelham. The Panthers, who were an improved team last year, took down Chelsea 46-42 last season.

Those 42 points for Chelsea marked a season high, which was a big positive against a solid team, but it was another close loss the Hornets can’t afford this season.

At this point, Pelham is probably the favorite to win that game again, but if the Hornets are in a close game, they’ll have to find a way to keep positive momentum in their most difficult region stretch of the schedule.

Following a bye week on Sept. 20, the schedule won’t get any easier over the next two weeks with a road trip to region foe Helena, who will possibly be the biggest surprise in the region, followed by a home game against Homewood, who finished second in the region last year.

Chelsea lost a tightly contested game against Helena by a final of 21-28 last year, but the Huskies will be even better this year, which will mark a difficult test. Against Homewood, the Hornets dropped a 34-7 loss, their most lopsided of the season aside from Oak mountain, but the Patriots may not be as good as they were a season ago.

In order to make the playoffs, Chelsea will likely need to at least win one of those two games.

A week later, the Hornets will be in a must-win situation on Friday, Oct. 18, with a road trip to Minor. A season ago, Chelsea won that game 31-27, and this year, the final score should favor the Hornets in a more dominant victory to close out region play with a playoff spot possibly on the line.

Chelsea will then close out the regular season with back-to-back non-region games against Calera on the road and Pell City at home with games scheduled for Oct. 25 and Nov. 1, respectively.