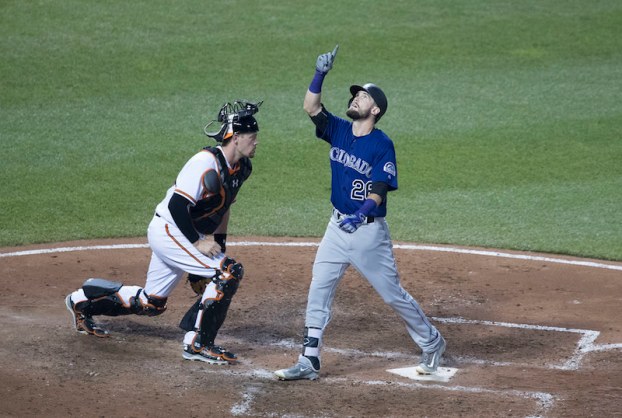 Former Oak Mountain baseball standout David Dahl has put together a remarkable first half of the 2019 MLB season with the Colorado Rockies. (Contributed)

Former OMHS star David Dahl on fire in the MLB

After being selected 10th overall by the Colorado Rockies in the 2012 Major League Baseball draft, former Oak Mountain standout David Dahl had everything in front of him, but still had to prove he could make it in big leagues.

Now in his third full year with the Rockies, Dahl hasn’t just proved himself as being worthy of the 10th pick, but he’s starting to prove himself as one of the league’s best players at 25 years old.

That was enough to make him a full-time starter heading into the 2019 season, and now we are finally getting a glimpse at his full potential.

Playing in just 63 games his first year and 77 games last year, Dahl has already played in 72 games before the All-Star break in 2019, and already has 20-plus more at bats than he did either of his first two seasons.

He’s not only getting more opportunities, he’s capitalizing on them, which has made him one of the league’s best hitters during the first half of the season.

Not just a top-half of the league player, but possibly a top 10 or top 20 player.

Through his first 72 games this season, Dahl holds a batting average of .319, which ranks ninth in all of the MLB. He only trails players like Cody Bellinger, Jeff McNeil, D.J. LeMahieu, Christian Yelich, teammate Charlie Blackmon, Rafael Devers, Jorge Polanco and Ketel Marte in the category.

He has also already hit 10 home runs this season, including his first-ever grand slam recently in a 6-3 victory over the San Francisco Giants, and has posted 22 doubles this season, which ranks eighth in the league and is only one away from being in the top four.

A product of Oak Mountain, Dahl is the only MLB first-round pick ever produced in Shelby County and closed out his career with a .412 batting average with 34 RBIs during his senior season with the Eagles.

Now, he has quickly turned that high school dominance into a career at the professional level.

Dahl is having an All-Star type year right, and while he hasn’t been named an All-Star starter, the reserves for the 2019 MLB All-Star game will be announced on Sunday, June 30, at 4:30 p.m., and his name is one that should be called.

By ALEC ETHEREDGE | Sports Editor For the third consecutive year, the postseason honors are rolling in for Spain Park’s... read more