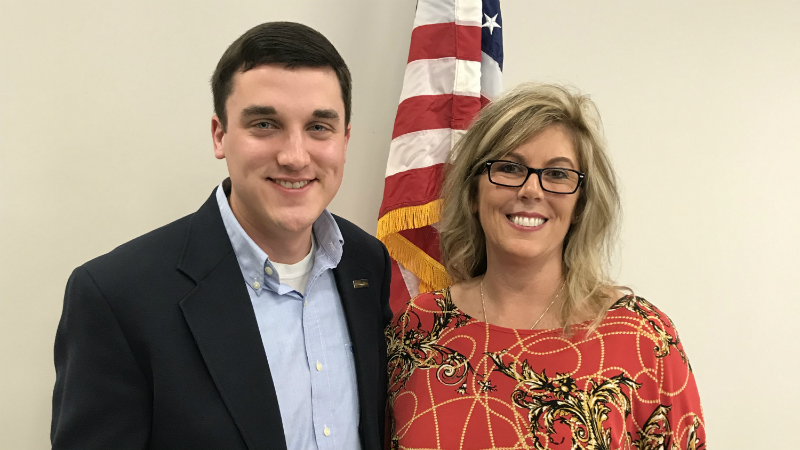 Jonathan Seale, left, took over as Harpersville municipal clerk after Stacy Walkup accepted a position with the city of Calera. (FOR THE REPORTER/KATHY COPELAND)

It has been a few months since Jonathan Seale took the reins as municipal clerk for the town of Harpersville, and in his words, he is “thrilled to be working here.”

Seale was sworn in at a Town Council Meeting back on April 1, a meeting when the Council and members of the community also gathered at a farewell reception for Stacy Walkup, who accepted a job with the city of Calera.

Taking a moment to check in with the two of them, it appears both have made a smooth transition, and describing it rings of something akin to musical municipal chairs. “Everything I learned while working in Pelham has been helpful in my transition into this job,” said Seale.

Having spent over a year working with Pelham City Manager Gretchen DiFante and former City Clerk Marsha Yates, Seale had the opportunity to explore many aspects of a career in municipal government. “I credit both women along with Mayor Gary Waters and the City Council for helping me start a career that led me to Harpersville,” said Seale.

A graduate of the University of Alabama who majored in political science and minored in history, Seale was a member of the Million Dollar Band and served as a band manager who assisted the coordinator of band operations with the planning and execution of extensive logistics for the organization.

“Being offered a career position in municipal government is exciting,” said Seale. The position became available when Walkup was offered the position of assistant city clerk and court magistrate for the city of Calera. “Working at the Town of Harpersville prepared me 100 percent for this career,” Walkup said. “I love serving the public.”

Having worked for two mayors in Harpersville (Theoangelo Perkins and Don Greene) and as executive director of the South Shelby Chamber of Commerce, Walkup has extensive experience in dealing with the public. “I love to serve the people of Shelby County; it’s my home,” said Walkup.

Her new post became available with the announced retirement of longtime assistant city clerk and magistrate Vickie Lewis. Walkup expressed gratitude for the opportunity to be trained by Lewis directly.

As for advice for Jonathan, Walkup offered, “Always keep growing!” She then shared that Seale is a part of the Shelby County Clerks Association, the Alabama Association of Municipal Clerks and Administrators and the International Institute of Municipal Clerks. “We all help each other,” said Walkup. “Jonathan is a joy to work with.”

Seale shared that his swearing in on April 1 was memorable and meaningful. His mother was able to hold the Bible during the ceremony, marking the start of a new career. “I’m following in my dad’s municipal footsteps,” said Seale.

Both Harpersville clerks, former and present, seem to be doing well and both consider themselves blessed. “God has prepared me for each career move that I have taken,” said Walkup.  Jonathan Seale said, “It’s a dream come true.”

Kathy Copeland is a community columnist for the Vincent/Harpersville area.