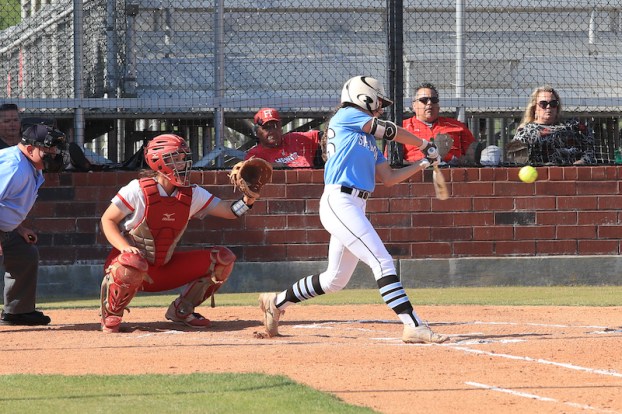 Spain Park softball player Annabelle Widra was named to the 2019 MaxPreps Sophomore All-American team on Thursday, June 27, making her one of the country’s best players. (For the Reporter/Dawn Harrison)

For the third consecutive year, the postseason honors are rolling in for Spain Park’s Annabelle Widra after another stellar softball season for the Jaguars in 2019.

The rising-junior has been a part of the Jags’ team since the seventh grade and has been a star across the state of Alabama and even the country since her eighth grade season.

Already to this point, through her sophomore season, Widra has been named the Shelby County Reporter Player of the Year for three consecutive seasons and has been named to the All-State team and All-County first team for that same span.

Now, following another impressive season, the Spain Park star earned her second MaxPreps All-American honor in her time with the team.

Announced on Thursday, June 27, Widra was named to the 2019 MaxPreps Sophomore All-American team honoring the best sophomore softball players in the country.

Widra earned the honor as a utility player this season, and rightfully so after doing just about everything on the field this year.

Spending time as the starting pitcher, where she dominated, while also playing in the infield and outfield at times and blistering balls at the plate, she was an easy choice as one of the country’s best overall athletes.

After bettering her ERA this season, and picking up just one less victory and 27 less strikeouts in 29 less innings pitched, Widra brought her career strikeout total to 772 with two more years of pitching left. She has thrown for at least 237 strikeouts in all three years as a starting pitcher, throwing 272 in eighth grade and 264 last season.

In three years at the plate, Widra has now picked up a combined 187 hits, totaling at least 53 hits each year. After posting no more than 27 RBIs in her first two years, she took advantage of her position in the lineup this year by driving in those 70 runs, which brought her RBI total to 117 over the last three seasons.

This year marked a career-high in both hits and RBIs for her, and as she gains more power in the coming years, her bat should continue to be a threat, while her pitching will always be difficult to handle.

By ALEC ETHEREDGE | Sports Editor ALABASTER – The Thompson Warriors burst back onto the scene during the 2018-19 basketball... read more