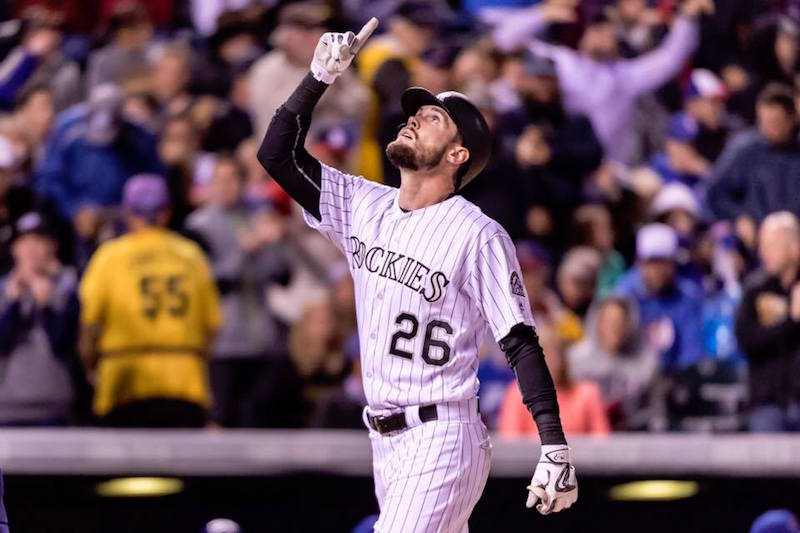 Oak Mountain’s David Dahl became just the second player from Shelby County to ever make an MLB All-Star Game after being announced to the National League team on Sunday, June 30. (Contributed)

As he rounded the bases on Sunday, June 30, at Coors Field after hitting a three-run bomb over the right field wall, David Dahl was taking what seemed like a victory lap.

While the Colorado Rockies went on to lose the game 12-5 to the Los Angeles Dodgers, Dahl’s homer cemented the All-Star worthy first half of the 2019 MLB season he was having; and moments after crossing home plate, the former Oak Mountain Eagle was named to his first All-Star game.

A local product out of Shelby County, Dahl’s nomination to the National League All-Star team marked a historic moment as the second baseball player from the county to be named to the Midsummer Classic. The only other former Shelby County player to advance to the All-Star game was Thompson’s Jim Davenport in 1962.

Though there is still work to be done for Dahl and the Rockies, who sit 12 games back of the Dodgers in the NL West, but are tied for the second Wild Card spot, making the All-Star team at 25-years-old is a milestone accomplishment and has cemented him as a rising star in the league.

So far this season, Dahl is tied for ninth overall in the MLB in batting average at .317, while his last seven games have been even more remarkable. In that seven game stretch, he is first RBIs with 14 and is second in the league in home runs with four.

With a week left until the All-Star break, he still has time to improve those numbers even more, but this has already been the most successful season for Dahl since being called up from the minor leagues midway through the 2016 season.

While he’s having an incredible year this season, most remember him bursting onto the scene of Major League Baseball when he tied a record for most consecutive hits to start a career with 17, which gave him all the confidence he needed.

He went on to finish his first season with a batting average of .315 at the plate as well as 70 hits and 24 RBIs in 222 at bats to get off to a promising start.

After that season, however, Dahl didn’t return to the majors until 2018 thanks to an injury during the 2017 season, but during his return he flashed more brilliance with a batting average of .273 as well as 48 RBIs and 16 home runs.

His power alone in his second season was enough to make him a full-time starter heading into the 2019 season, and now, we are finally getting a glimpse at his full potential.

Playing in just 63 games his first year and 77 games last year, Dahl has already played in 75 games before the All-Star break in 2019, and already has 30-plus more at bats than he did either of his first two seasons.

He’s also already equaled a career RBI mark with 51 this season, which was three more than 2018, and he’s just four homers away from equaling last year’s total with half of the season still left to play.

Amongst National League outfielders, Dahl ranks in the top eight of every major statistical hitting category.

Drafted 10th overall by the Rockies in the 2012 MLB Draft, Dahl was a two-time All-State player for the Eagles and also played for the USA 18-under National Team.

Originally committed to play for the Auburn Tigers, Dahl couldn’t pass up the chance to prove his worth in the big leagues after being drafted in the top 10.

He went on to spend his first three years in the Rockies’ farm system, before getting called up in 2016. He then spent 2017 rehabbing in the minors and started 2018 in the minors, before quickly showing the organization he belongs on the 40-man roster.

Now, in just his first full season with the Rockies, he’s cemented himself as an All-Star.

From his 17-game hit streak to start his career, to being a top 10 hitter in the league this year, Dahl has just scratched the surface, and will be a major factor in Colorado’s chase for the postseason.

The 2019 All-Star Game will take place on Tuesday, July 9, in Cleveland, Ohio, at Progressive Field, and will be televised by FOX starting at 6:30 p.m.