ALABASTER – Nine-year-old Alabaster resident Caroline Cook hopes to make a big splash in the pageant world as she and her parents travel to Walt Disney World July 7-13 with intentions to win the USA National Princess title. 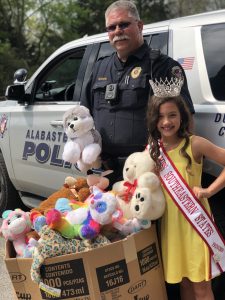 Caroline Cook’s Care Bears Wish Bears initiative donates teddy bears to kids on the Make-A-Wish Alabama waitlist and to police officers who gift them to children in need. (Contributed)

Her current title as USA National Miss Southeastern States Princess earned her the trip to Florida to compete for the USA National Princess title against 43 other girls from throughout the United States. The winner of the pageant also wins a $5,000 scholarship and will attend New York Fashion Week.

Along with the teddy bear is a handwritten note from Caroline letting the recipients know that Make-A-Wish has not forgotten about them.

“Sometimes it can take a while to make a wish come true, so the teddy bear and handwritten note just lets the kids on the waitlist know that they have been forgotten and that they’re still going to get their wish,” said Alan Cook, Caroline’s father.

Caroline also gives bears to police officers to keep in their patrol vehicles for when they come into contact with a child who may need comfort. So far, more than 300 bears have been donated, but her goal is to reach 1,000.

Caroline also has been busy promoting USA National Miss’s anti-bullying platform, Crown C.A.R.E.S., by educating her peers on the importance of being a buddy and not a bully.

Caroline, an upcoming fourth grader at Thompson Intermediate, competed in her first pageant at 2 years old. Her next pageant was the Miss Heart of Alabaster pageant four years later when she was 6. It was that pageant that sparked her love of participating in pageants.

“One of the organizers with that pageant told us that she did really well and encouraged us to try national pageants,” Alan Cook said.

Caroline has been competing in national pageants ever since.

“I just love it so much,” she said. “I like meeting other girls my age. I like to be on stage and in the spotlight.”

Last year, she was the first runner up in National American Miss pageant that took place in Anaheim, California.

At the beginning of Caroline’s pageant journey, her father said he was against it.

“I didn’t want my daughter to be crushed whenever she didn’t win, and I didn’t want her tanning and wearing fake teeth and heavy makeup, but that’s not what this particular organization is about,” he said.

Caroline participates in natural pageants, which he said means the children’s interview skills, talents, philanthropic involvement and their ability to be role models are weighted more heavily than their physical beauty.

“When she got first runner up last year, she went over to winner afterward to congratulate her on a job well done, and whenever she wins the girls congratulate her as well,” Alan Cook said. “I’ve seen her level of confidence increase, her ability to communicate has improved and it’s really brought out her personality. With every pageant we do, the goal is to have fun. I’m kind of the helicopter dad making sure that she’s still being a kid and not growing up too fast.

“The skills that she’s learned will benefit her for the rest of her life,” he added. “I know that pageants can be a bit controversial, but I have witnessed with my daughter the good it can bring.”

Caroline said her goal is to become Miss Alabama USA, which means she would become the representative for the state of Alabama in the Miss USA pageant.

Those who would like to follow Caroline’s journey can live stream the pageant by going to PageantsLive.com.