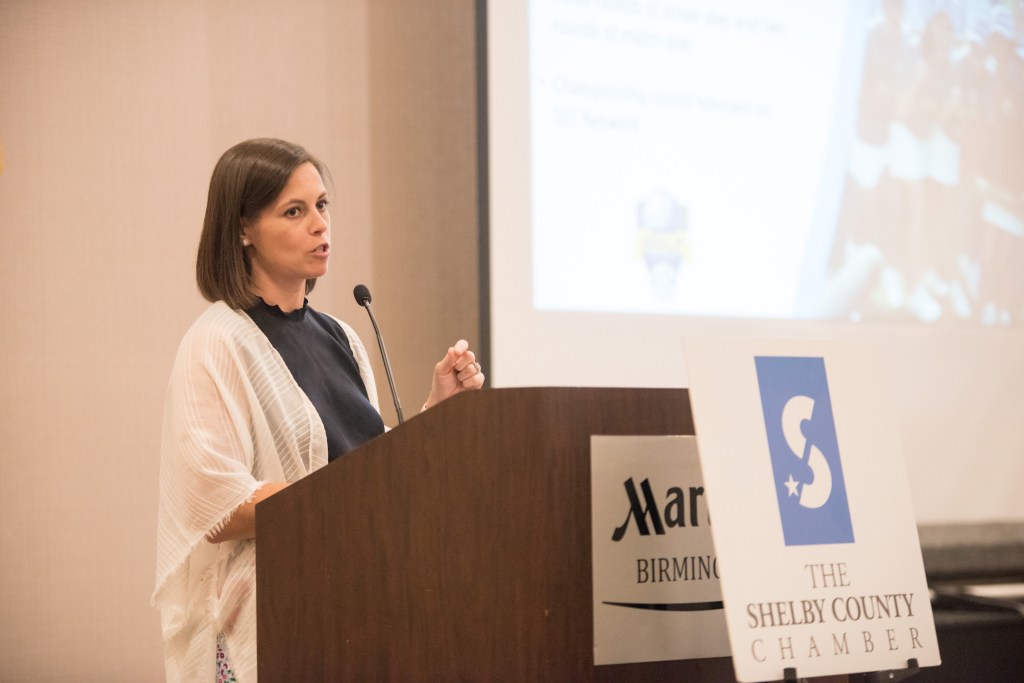 BIRMINGHAM – At the Shelby County Chamber’s June Community Luncheon on Wednesday, June 26, chamber investors learned about the growing sports tourism industry and the impact it has on the economy.

The June Community Luncheon was held at the Birmingham Marriot located on Grandview Parkway.

Guest speaker Carrie Coleman, assistant vice president of collegiate and amateur sports for Bruno Event Team, provided some insight into the world of sports tourism. Coleman received a Bachelor of Science in Commerce and Business Administration from the University of Alabama and has been with Bruno Event Team since 2008.

Sports tourism has grown to become a $15 billion industry, Coleman said. Venue development, the rise of youth sports, such as travel leagues, and better facilities being built has spurred growth in the field.

Coleman highlighted Bruno Event Team events that are held in the greater Birmingham area, such as the SEC Women’s Golf Championship held at the Greystone Golf and Country Club. The event brings together women’s golf teams from all 14 schools in the SEC. The championship round is televised on the SEC Network and the event has an annual economic impact of more than $2 million.

Likewise, Regions Traditions, also held at Greystone, accumulates more than $2 million in economic impact. On average, more than 80,000 spectators attend the event. The event has raised more than $17 million for Alabama charities and is televised nationally and internationally.

The SEC Baseball Tournament has been held at the Hoover Metropolitan Complex for 20 years and counting and has an annual economic impact of about $12 million. It is the highest attended NCAA baseball tournament. This year’s event shattered previous attendance records with an overall count for the week at 162,699 attendees. The previous record was 150,064 attendees in 2016.

In its first year of existence, the Hoover Sluggers Invitational took place at the Hoover Met in late May. The event, for the 10U-12U age group, brought 27 youth baseball teams from four states to Alabama for four days. Coleman said she was pleased with turnout for given that the event was in its first year.

Coleman said there are numerous opportunities to enhance sports tourism in Shelby County and the greater Birmingham area and with these events come opportunities for local businesses to gain more exposure.

Read the details on the upcoming Back-to-School Sales Tax…