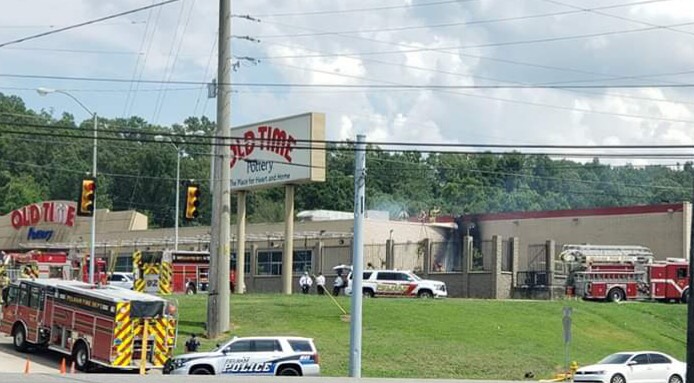 The Pelham Fire Department was dispatched to Old Time Pottery on July 1 after a stack of wooden pallets caught on fire. (Contributed)

PELHAM – There was a lot of commotion near the U.S. 31 and Industrial Park Drive intersection on the afternoon of Monday, July 1, as the Pelham Fire Department worked to extinguish a fire at Old Time Pottery.

Fire Chief Tim Honeycutt said large stacks of wooden pallets caught on fire at the store. Firefighters arrived on the scene at 2:34 p.m. and had the fire extinguished about 20 minutes later. The Pelham Police Department provided assistance.

Honeycutt said the fire took place outside in the rear of the business causing some damage to the exterior of the building.

“It didn’t cause too much damage,” Honeycutt said. “We removed some of the roof just to make sure it didn’t get into the roof. There was a little smoke inside the building, but that was it. They’re still open for business.”

Honeycutt said the cause of the fire is still under investigation.