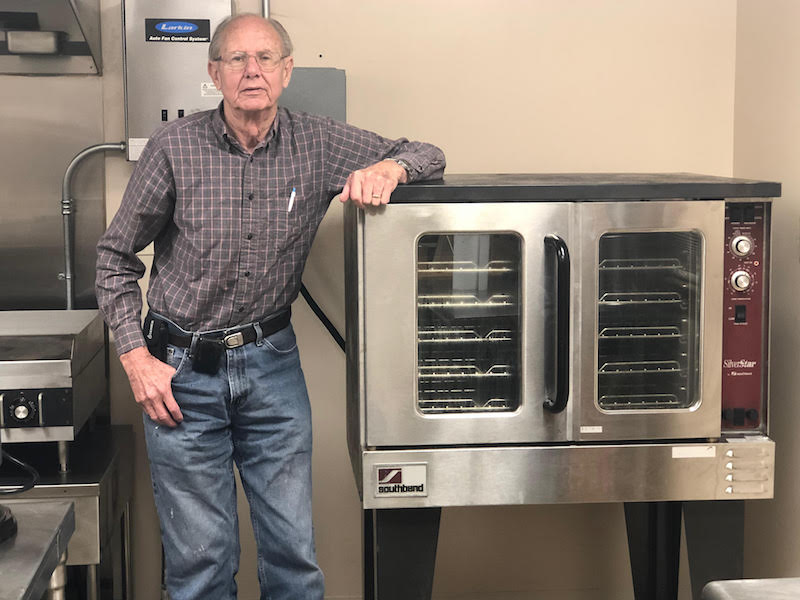 Seventy-six-year-old Arkansas native Thomas “Tom” Neal Trimble has been married to his wife, Joel (to whom Tom is known as Doodlebug) for 57 years.

The couple’s desire to live near a lake guided them to Shelby, Alabama.

He worked as a Range Controller Officer at English Air Force Base for 10 years and as a Contract Inspector for two years; the year was 1996.

Prior to his Civil Service career, Tom enjoyed a 20-and-a-half-year career in the United State Air Force.

The first 14 were spent overseas. Three children were born to the couple during this time, two of which were born overseas.

From his retirement in 1999 until now, Tom has devoted his time and energy to Shelby Iron Works.

Tom dedicates on average 14 hours two days each week at SIW; however, due to health issues, he has had to scale back on the amount of time he works.

His “jack-of-all-trades, master of none” proficiency in wiring, plumbing and carpentry has earned him an unofficial title of head of maintenance.

In addition to maintenance, he helps during the fall festival, where he bottles syrup.

Due to age and health as individuals on the current volunteer roster become less available and unable to perform many vital tasks required in order to ensure the smooth operations of SIW, Tom has grown concerned about the fate of the program.

His memories of projects at SIW include his architectural design and construction of the structure, which is now the Country Store. Long ago, it was the only bathroom on the grounds.

Tom served with a team of builders for the dining facility and kitchen. He designed and built three different structures in SIW and remodeled three, and for the past three years has served as chief of maintenance.

His abilities have been used in other areas such as writing articles and publishing the SIW Bulletin for five years.

Trimble’s service to his community has extended to his volunteer work with SIW.

In the past he founded and served as president of Chicksand England Military Base model club, which prompted his interest in modeling and specifically radio-controlled model aviation.

He was Cub Scout leader for his son’s Boy Scout troop, and president of Nags Head Homeowner’s Association.

He joined Historic Shelby Association in 1999.

“The rewards of being involved with the Association are associations with people and the sense of achievement. I can see the results of what I am doing and involved in,” Trimble said.