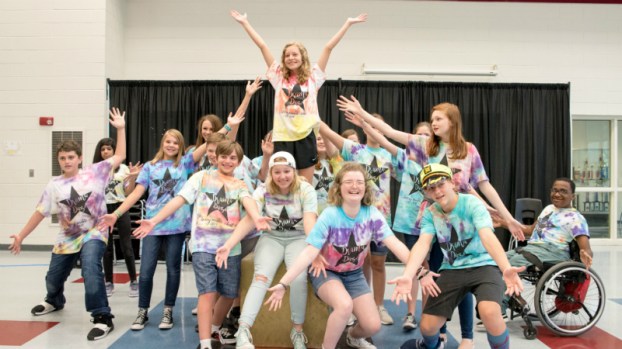 Students perform at the conclusion of the Drama Daze camp at Berry Middle School on June 28. (REPORTER PHOTO/KEITH MCCOY)

Classes included sessions with a makeup artist and one focusing on stage combat, among others.

Students entering grades 4-9 were eligible for participation in Drama Daze. Most of the participants are Berry Middle School students, Rowe said, but some students from outside the district also attend.

The $185 registration fee included the opportunity to make a tie-dye T-shirt, and students wore their shirts on the final day of the camp for a showcase time where they performed and presented some of their work during the camp for parents.

On June 26, Josiah Toone, Mae Elliott and Faith Coggin, all current or former BMS students, were participating in an art exercise, rolling a die to determine which shapes, patterns and textures they would include in a piece.

All three students said the acting component of the camp was their favorite.

“I’m kind of a drama queen, as my parents would call me,” Elliott said.

“My family says I’m very dramatic, and sometimes I don’t even realize I am,” Coggin added.

Toone said that during the school year, students try out for parts in school plays, but during the camp, everyone participates.

“With this, you’re always going to get a part, and they’re all pretty funny,” he said.

Participants brought their own lunches, but on the final day, pizza was provided and an ice cream food truck was on site offering treats.

Rowe said her hope is that the camp helps pique an interest for students and provides them with an opportunity to express themselves and make new friends.

She told of a new camp participant who after the first day was excited to tell his mother about his experience.

“He told her that he found his people,” Rowe said.

The 2020 camp will be held June 22-26. Anyone interested in finding out more or registration should email Rowe at drowe@hoover.k12.al.us.

Proceeds from the camps are used to upgrade lighting and sound at the school.

CHELSEA – Chelsea officials are seeking the public’s input about a proposed 1-cent sales tax increase in the city for... read more