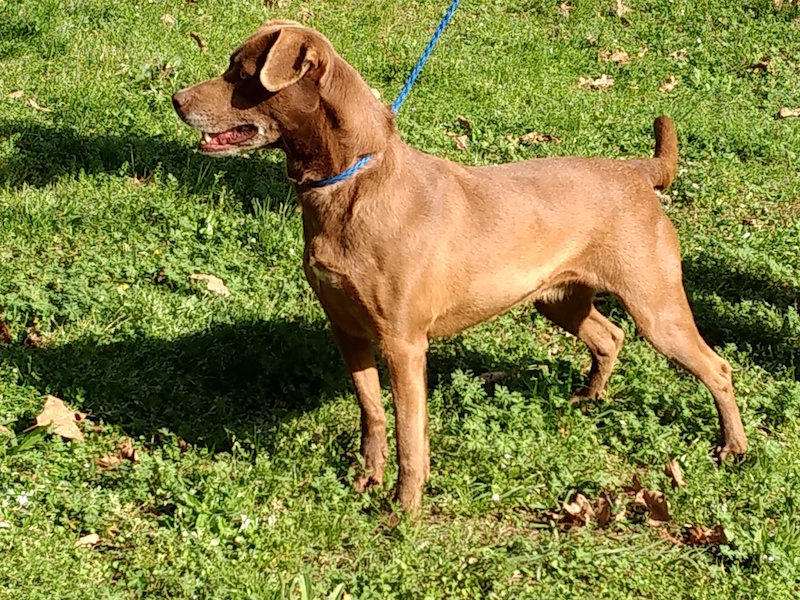 KoKo came to Sandra Shaffer’s 2nd Chance Animal Sanctuary in Blount County, Alabama, after her previous owners moved and left her behind. Shaffer nursed her back to health for more than a year before she was ready for adoption. (Contributed)

BLOUNT COUNTY, Ala. – Sandra Shaffer cried as she placed Archer the dog on his transport ride to his forever home in New Hampshire several months ago.

“I cry with every one of them when they leave,” Shaffer said. “But they’re happy tears.”

As attached as she was to Archer, a 3-year-old black and tan mix with boundless energy, Shaffer knew the bittersweet goodbye would come. She had hoped and prayed for it.

Shaffer, who operates 2nd Chance Animal Sanctuary, sees her place as a pit stop for pets like Archer until they are adopted.

Each successful adoption is as much a win for the animals as it is for Shaffer, a devoted advocate whose commitment to the creatures in her care is unwavering.

“I was elated,” Shaffer said of Archer’s adoption. “I had him for over a year, and he just wasn’t being seen. That weighs heavy on me when I can’t get them seen, because then, they don’t ever have a chance.”

By “chance,” Shaffer means an opportunity to be adopted. As the owner of a no-kill sanctuary, she is always prepared to keep any animal she accepts at 2nd Chance. Her goal, however, especially with younger dogs like Archer, is to find forever homes for them.

This goal has never been more important to 65-year-old Shaffer than now, as she works toward downsizing her operation to focus on her health.

“I know my limitations and have to say no sometimes,” she said of her intake at the sanctuary.

When the physical and emotional effects of running the sanctuary mostly by herself wear on Shaffer, she reflects on her “success stories” over the years – the adoptions that worked out for some of her worthiest candidates.

Shaffer doesn’t always know what circumstances a dog or cat has endured before they arrive at her sanctuary, but she makes sure they go to loving homes if they leave her operation.

Macie, Shaffer’s most recent adoption, came to her as a 1-year-old from the Blount County Animal Shelter, where she had been returned after her previous owners said she didn’t get along with their old cat. Macie now lives in New Hampshire with a “wonderful” retired school teacher, according to Shaffer.

Ace came to Shaffer from a hoarder situation. He was heartworm positive and had to be treated before he could be adopted. Like Macie, he also lives in New Hampshire now with a retiree.

Hannah came from the same hoarder situation as Ace. She currently lives in New York with a furry sibling brother and her mom and dad.

And KoKo was rescued from a house, where her previous owners had left her chained up when they moved.

“She was in very bad shape, and it took many months to get her healthy,” Shaffer said. “She was here at the sanctuary for over a year as she, too, was heartworm positive and had to be treated.”

KoKo lives in Mississippi with her dad now.

“If I have to worry about what they’re going to be used for, I keep them here,” Shaffer said. “They’re never going to be in harm’s way again. That’s my commitment. I’m supposed to be the stopping-off place, and if that perfect home doesn’t come along, they have to stay.”

Since opening her non-profit sanctuary in 2006, Shaffer has completed adoptions for about 4,800 dogs and cats.

Her oldest adoption was 11 years old.

They have gone to new homes around the country and overseas, to places like Japan and Hawaii, she said.

To adopt an animal from 2nd Chance, individuals must submit an application with references from a veterinarian.

Shaffer said most of her adopters are referred to her by someone who has adopted from her in the past, or they have previously adopted at least one animal from her.

“They know that the animals are well taken care of and well socialized,” she said. “They know I work with and train the dogs, more so than at a shelter.”

A home visit is also required in adoptions at 2nd Chance.

All animals adopted from the sanctuary are fully vetted, vaccinated, on heartworm preventive medication, and are spayed or neutered. In addition, most are microchipped.

Every successful adoption advances Shaffer’s mission of providing a better future for as many animals as she can.

“I’ve seen the worst, but I have to stay focused on the positive,” she said. “(The animals) are my reason for getting up every day.”

Having mostly recovered from two knee surgeries in the last year, Shaffer has resumed another passion she has: educating people on animal welfare issues in an effort to improve the lives of all companion animals.

This serves a dual purpose of helping to promote the sanctuary and to solicit support for other animal rescue endeavors by telling her story of more than 40 years in the rescue community.

Donations, along with corporate sponsorships, help to ensure Shaffer can continue her work and establish the sanctuary as a perpetual haven for animals in need of a home, whether temporary or permanent.

For more information about the sanctuary, the adoption process or booking a speaking engagement with Shaffer, contact her at sshaffer01@bellsouth.net.