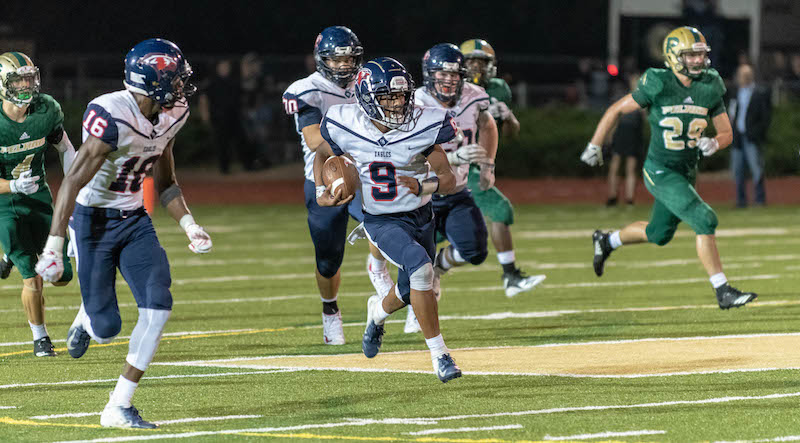 The Oak Mountain Eagles will have one of the most difficult schedules in the state this season, but with several key players back, they’ll also be a sneaky-good team. (File)

The 2-8 record posted by the Oak Mountain Eagles in 2018 wasn’t telling of the up-and-coming talent the team had, but instead telling of the difficult road they faced competing in Class 7A, Region 3.

What has become known as one of the most difficult regions of football in the Southeast with teams like Hoover, Thompson and Hewitt-Trussville being ranked in the top 50 nationally the last couple of years, and others like Spain Park, Mountain Brook and Vestavia Hills being no slouch either, Region 3 makes every participant’s path a difficult one.

Last season, the Eagles were forced to take on the top three teams from the region in consecutive weeks and in their first three weeks of region play. While they competed strongly against each, and came close to upsetting both Hewitt-Trussville and Thompson, they ended up hitting a three-game losing streak.

With those games in consecutive weeks, Oak Mountain also found it difficult to recover having taken on three of the most physical and deep teams in the state, which led to injuries and difficulty with depth throughout the rest of the season.

That eventually led to an eight game losing streak to finish region play 0-7 and in last play, but what it did do was give a lot of returning players to this year’s team plenty of experience.

While this season’s schedule will feature that same gauntlet early in the year, something tells me the Eagles won’t just be more prepared, but with a top sophomore quarterback returning and one of the toughest offenses to prepare for, they’ll be a sneaky team in 2019.

Oak Mountain’s entire 2019 schedule will see them participating close to home, and it starts on opening night with a short trip up U.S. 280 to take on county rival Chelsea on Friday, Aug. 23.

The Eagles are 6-1 against Chelsea all time and will be coming off a dominant 42-9 victory over the Hornets last year, where freshman quarterback Evan Smith turned heads for the first time. Oak Mountain has won the last two games in a row, while Chelsea’s last win in the series came in 2016.

That will lead into an early bye week for the Eagles on Aug. 30, and rightfully so, as they’ll return with the gauntlet of those three difficult region games in a row starting with the Hewitt-Trussville Huskies at home on Friday, Sept. 6.

Last year, in one of the more thrilling games the county saw, Hewitt was able to sneak out a home win in a back-and-forth affair by a final score of 52-47.

This season, the Huskies look to be the favorite in the region, but will still be on a similar playing field to last year’s team, which could lead to another thriller.

After kicking off region play at home, the Eagles will host their second home region game in as many weeks a week later against Thompson on Friday, Sept. 13.

This was another tightly contested game early on for both teams last year, but late in the game, Thompson was able to pull away to win by two touchdowns, 35-31.

Thompson is still expected to be an extremely good team this season despite losing All-State quarterback Taulia Tagovialoa thanks to a loaded defense and some of the best receivers in the state, and a capable fresh face at quarterback in Sawyer Pate.

With that said, the Oak Mountain offense is tough to prepare for, especially with the dominant run game the Eagles will have this year, which should create for a good offensive battle between the two.

The three-game region gauntlet will then come to an end on Friday, Sept. 20, with none other than the Hoover Buccaneers, who have built one of the best dynasties in Alabama high school football history.

Hoover may not be quite as good as usual this year, but even on a year where that is said, the Bucs are still easily a state championship contender if not the favorite to win it all.

Their depth is what makes them so good, and with Oak Mountain coming off the two difficult games in a row, that may be the difference. The Eagles lost 48-20 last year, and have never beaten Hoover in school history.

While there will be much talk about those first three region games, it doesn’t get easy at any point the rest of the way, even with a home matchup against Class 6A non-region opponent Pelham a week later on Friday, Sept. 27.

Despite the classification gap, Pelham dominated every facet of last year’s matchup with a 52-21 victory—the most lopsided loss for the Eagles all year.

Maybe a little bit defeated after the previous three games, Oak Mountain struggled to get up for the game, but head coach Cris Bell said that won’t happen again this year, knowing his team should at least compete in that game.

The Eagles will jump directly back into region play with a road trip to Mountain Brook on Friday, Oct. 4, as the difficult schedule continues. Last year, the Spartans surprised the region and went on to earn a spot in the playoffs with a 21-0 shutout victory against Oak Mountain being one of their nine wins.

I would expect a much more competitive game this year between the two, but it will all depend on how fresh the Eagles will be with Mountain Brook coming off its bye week.

On Friday, Oct. 11, Oak Mountain will play host to another region foe in Tuscaloosa County. It’s a game the Eagles will be looking for redemption in after losing a 10-7 game against the Wildcats a season ago in a game they should have won.

While Tuscaloosa County is on the rise and improving, Oak Mountain should be favored and with only two region games remaining after that, it will be important to win with the playoffs on the line.

The final four region games of the season will be key for the Eagles this season, but specifically the final two against Spain Park and Vestavia Hills on Oct. 18 and 25, respectively.

Both games will take place on the road this season, but wins in both would likely mean the Eagles have a strong shot to be in the postseason.

Last year, Oak Mountain did a decent job defensively against both of those teams, but went on to lose 21-0 to the Jaguars and 28-14 to the Rebels.

This season, health will continue to determine the Eagles’ success that late in the season, but the offense should score in both, and they should have a chance to win both.

The regular season will come to an end on Friday, Nov. 1, when Oak Mountain plays host to Pace (Florida) High School. It will be a fun out-of-state test for the Eagles, as Pace will travel north from the Pensacola area.

Oak Mountain’s road will be a tough one again this year, but the four-game stretch from Mountain Brook to Vestavia Hills will determine the Eagles’ postseason in 2019.