“I’m glad Grey came in and worked,” Jerica Snowden said flipping through the magazine. “I was pretty wiped out at the end.”

“You put in your time Jerica, with others—and on your own. Several staffers returned to finalize the work. This magazine came together thanks to a series of heroic efforts,” I said. Examining the finished magazine with students made me proud of the PHS Literary Magazine Staff. 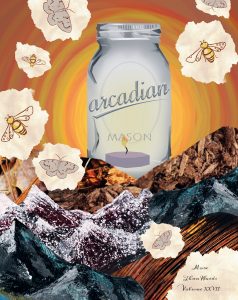 “If you’re going to create a literary magazine, you need a mission statement,” I told my very first literary magazine group in the fall of 2004. Together, those students constructed the tagline that would become their driving force: “Our mission is to celebrate the artistry and creative diversity of Pelham High School students, by providing a venue for the publication and distribution of their work.”

Working to align with their mission statement actually led to Write Night allowing the Lit Mag Staff to provide a venue for the performance art of musicians, vocalists, actors and spoken word poets. Many Write Night performed poems made their way into print creating a stirring printed remembrance of 2019 Write Night. Actually, going to press with the magazine remains incredibly difficult.

Collaboration is inevitable because producing a school publication requires enormous effort. What’s unique about the process of magazine-making each year is what that production looks like. With a group of mostly senior staffers this spring, taking a variety of AP tests and attempting to finalize plans for a multitude of colleges, the magazine took shape in a tag team fashion resulting in an unforgettable cover, captivating artwork and photography, a multitude of diverse and award-winning writing and finally—fresh design.

An excellent mix of artwork and photography, along with the design talents of the staffers, provided color and visual appeal. Winning an Alabama High School Literary Arts award for literary merit with the 2018 magazine, this year’s writing contains even more award-winning pieces. Also, Erin Riley returned drama to the magazine with an original script.