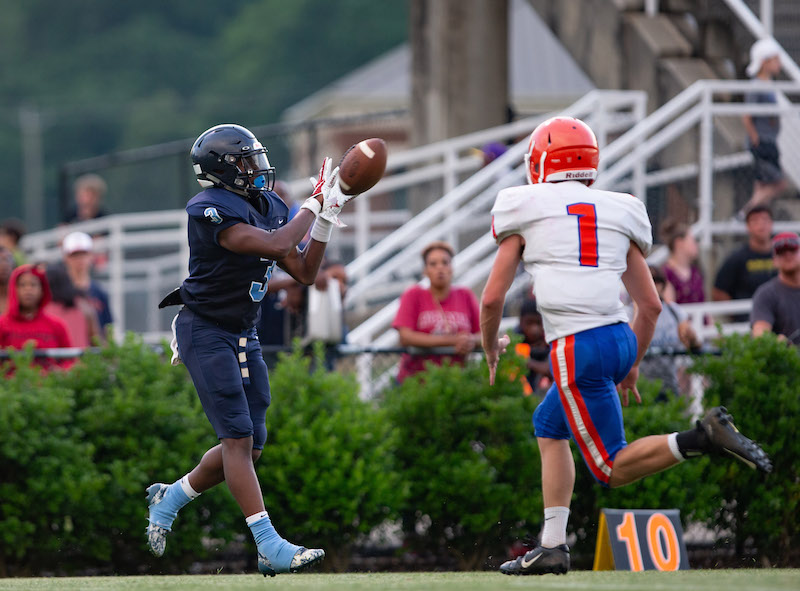 The Calera Eagles will face another difficult schedule in 2019, but with a new coach, there is new belief for the Eagles to turn the page this season. (File)

There is no hiding from last year’s 1-9 overall record for the Calera Eagles, as the move from Class 5A up to one of the 6A classification’s most difficult regions proved to be too much.

And while 2019 will feature several of the same tests, a new coach and several returning players will give the Eagles hope and a new goal to work toward, as they look to mend last year’s difficult season.

With the departure of Andrew Zow to Bessemer City, Trey Simpson will step in as the Eagles’ new coach this year, and will have to lead his team down another difficult path with the likes of Pelham, Wetumpka, Opelika, Benjamin Russell, Chelsea, Stanhope Elmore and Helena all on the schedule.

If the Eagles want to get that bitter taste out of their mouths this season, a win early in the season will help, and this year, they’ll get three of their first four games at home, as opposed to traveling three of the first four weeks last season.

None of those games, however, will be easy, but Calera will at least have chances to prove they have turned the page during the first two weeks when they travel to Pelham and play host to Pell City.

The Eagles will open the season with a trip to the northern part of Shelby County on Friday, Aug. 23, when they take on the Pelham Panthers. Last season, Calera jumped up early in the game, but saw the Panthers come back to pick up a dominant 45-24 victory.

Following that road opener, Calera will return home for the next three weeks in a row starting with a matchup against the Pell City Panthers on Friday, Aug. 20.

Last season, Pell City picked up a 27-7 victory in the game, but this year’s should be much closer throughout if the Eagles have improved at all, or if they have learned from last year’s mistakes.

A 1-1 start would be a confidence boost for this team, especially heading into the third week of the season when the Eagles will play host to Wetumpka.

The Indians finished last season as region champions thanks to a 3-1 region record, and went on to advance to the semifinals of the Class 6A playoffs before losing to Saraland 22-21.

Wetumka won last season’s game 34-14, and will likely be loaded with talent again in 2019.

A difficult two-week stretch will continue with Stanhope Elmore a week later for Calera’s second region contest in as many weeks. Stanhope won last year’s matchup 35-12 despite an average year that featured a 6-5 overall record and a first-round exit in the playoffs. Like the first two games of the season, if the Eagles are improved, they will be much more competitive in this game.

Following a bye week on Sept. 20, Calera will travel to Bibb County looking for redemption from a 34-33 loss last year. Still a 5A team, Calera should be considered a favorite in this matchup, but the Choctaws will go into the matchup with the confidence this season.

Regardless of what happens in that matchup, the Eagles should have a strong chance at a region win the following week on Friday, Oct. 4, when they host Selma. Last season, Calera went on the road and took the Saints down by a final score of 23-6 for the team’s only win of the 2019 season.

To that point in the year, an overall mark of 3-3 would be great.

Over the next two weeks, however, the Eagles will face teams that beat them by a combined 70-17 last year; and this year, both games will be on the road.

The first will be a region trip to powerhouse Opelika on Friday Oct. 11. The Bulldogs took down Calera 30-10 last year and went on to finish 7-5 with a berth in the quarterfinals of the playoffs to conclude the season.

A week later, on Oct. 18, the Eagles will travel south again to take on Benjamin Russell. The Wildcats, who finished 6-5 last season and exited the playoffs in the first round, handed Calera its worst loss of 2018 by a final score of 40-7.

That was at a difficult point in the year for the Eagles, who went on to lose their final four games by a combined 133-34.

If Calera does somehow find a groove this season and has something to play for in that final region game, it shouldn’t be nearly as lopsided.

Following that region contest, the Eagles will close out the 2019 regular season with two consecutive non-region matchups against county opponents.

The first will be a trip to Chelsea on Oct. 25, followed by a home game against Helena on Nov. 1.

Both of those teams struggled at times last year, but both also hit their stride at the end of the season—something Calera fell victim to losing 35-3 to the Hornets and 28-14 to the Huskies.

A win or loss in those games won’t determine a playoff berth, but winning both or losing both will tell us where this team is at the end of 2019.