“Coach Kiel asked me to create a piece of artwork for her before I graduated. This is her gift,” said Ernest Samuel, cradling his Panther sports and marching band illustration. 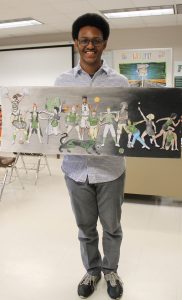 “I didn’t know he was an artist,” PHS Athletic Director Kim Kiel said the week following graduation. “Because he performed with the band, I knew Ernest as a musician. I knew he was smart—and that he ran track.”

“In middle school, he ran track,” Kiel responded. “Before the holidays, Ernest interviewed me to discover what I wanted,” Kiel said. “With spring’s craziness, I focused on everything else. Then, he presented me with this incredible art. I’m having it framed for my office.”

Studies cited in “Range” reveal that scientists and engineers achieving at award-winning and problem-solving levels in their professions pursue aesthetic activities in their down time—including stints as amateur actors, poets, writers, artists, or other creative endeavors.

Sharing the words of Apple founder Steve Jobs, Epstein reminds readers that Apple was the first computer manufacturer to break from regular typeface.

“If I had never dropped in on that single course in college, the Mac would never have multiple typefaces or proportionally spaced fonts,” Jobs said.

“The best thing to do is expose broadly and help them reflect,” Epstein says in reference to whether kids should specialize very early. Indeed, taking the time to sample a range of interests early seems to sharpen specialties later.

Ernest Samuel’s sampling of the diverse course offerings and extracurricular activities of his schools have certainly developed multiple levels of intelligence, artistry, and intellectualism along with a broad base of experiences that will be enhancing his education and informing his experiences for years to come.

Being an educator is worth the effort