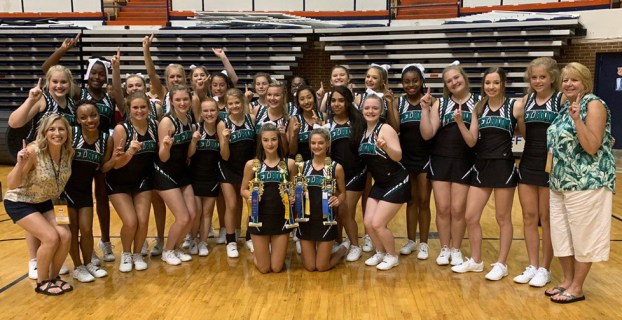 As many PHS students enjoyed the first relaxing days of summer, Pelham High School and Pelham Park Middle School Cheerleaders started their summers by attending and competing at Auburn’s UCA sponsored cheer camp beginning May 28 and closing with competition on May 31.

Captain Ansley Stovall and Co-captain Kaitlyn Wester are the only two seniors on this year’s team leading twenty-five cheerleaders in large varsity competition. At final camp competitions, large varsity is the toughest division—and teams with the most seniors often dominate.

“Kaitlyn and I are best friends so we were able to work well together and come up with ideas easily,” PHS Cheer Captain Ansley Stovall said. “Mrs. Coker, varsity cheer sponsor, and Mrs. Lovett, junior varsity sponsor, are both so helpful, always encouraging us to be the best that we can possibly be.”

At UCA Cheer Camp, coaches who know when to push—and when to lighten the mood—are invaluable. According to Stovall, coaches Jean Coker and Rachel Lovett are the best combination of allies who believe in hard work and fun in the perfect proportions. While many teams were probably stressing about the coming day’s final competition, Pelham’s cheer coaches executed another plan.

“When we entered our final pre-competition meeting,” Stovall said, “Mrs. Lovett and Mrs. Coker had strobe lights and music. We stayed in there dancing and singing together as a team. The last song we played was “The Climb” by Miley Cyrus. We went to bed exhausted, connected and confident.”

A team of super-achievers were probably stressing themselves—and this pre-competition dance party and team-building activity proved the perfect prelude to success.

PPMS cheerleaders won 2nd place in rally routine and third place in all other categories.

“What makes me most proud of these hardworking girls is their attitude,” Coker said. “They’re willing to do whatever it takes to achieve success!”