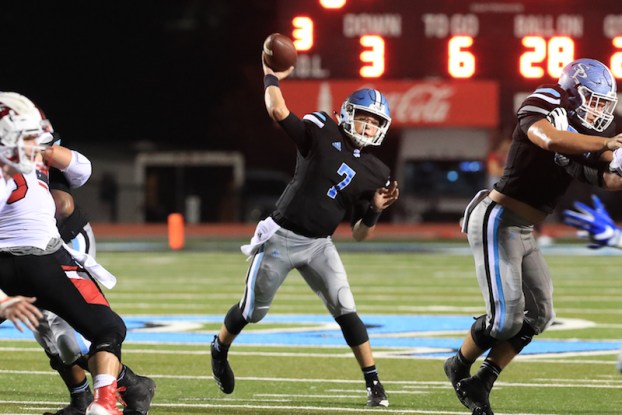 The Spain Park Jaguars will face another difficult schedule in 2019, but have winnable games on their schedule that will give them a chance at a playoff spot. (File)

Last season may not have looked great on paper for the Spain Park Jaguars with a final record of 4-6, but the Jags were ultimately two early-season losses by 10 points or less away from being 6-4 and in the playoffs.

Those two losses were to Vestavia Hills and Mountain Brook in the first four weeks of the season, and again in 2019, those two games will likely make-or-break Spain Park’s playoff hopes.

Before diving into those important region games, however, the Jags will have two non-region and non-classification tests against Hillcrest-Tuscaloosa and Bessemer City to kick off the 2019 football season.

The Jags’ season opener will be on the road this season when they travel to take on Hillcrest on Friday, Aug. 23, looking for their second win in a row over the Patriots after last year’s 24-14 victory.

That will be followed by a home matchup a week later on Aug. 30 against Bessemer City. Spain Park will be looking for redemption in that one after losing 16-14 in a game the Jags should have won last year.

While both are Class 6A opponents, both represent difficult matchups as two quality teams, but if the Jaguars are a playoff team this year, they’ll be 2-0 after that stretch.

Then comes an important three-week stretch of region play before their bye week.

On Friday, Sept. 6, Spain Park will travel to Vestavia Hills to open region play. After coming up just short in a difficult 28-21 loss to the Rebels last year, the Jaguars will go into that matchup determined to start off region play on a high note with a redemption win.

With a lot of unknown for each team, this will be a telling early game for how each will handle the tough slate ahead in 2019.

Following that road game, the Jaguars will return home to take on Mountain Brook looking to redeem another close loss from last year’s schedule. The Spartans picked up a 24-14 victory over Spain Park last season as part of a 7-0 start, and went on to finish third in the region with a 9-3 overall record.

The Spartans will likely be a similar team this year, making this one of Spain Park’s biggest games, and in just the fourth week of the season.

It won’t get any easier from there, as the Jaguars will hit the road for a matchup with the Hewitt-Trussville Huskies on Friday, Sept. 20. The Huskies may be the favorite to win the region this season despite losing quarterback Paul Tyson thanks to several Division I caliber players returning to this year’s team, and a young quarterback with plenty of buzz.

The Huskies won last year’s game 44-13 over Spain Park, and while this year’s game should be much more competitive, the Jags will have to prove they have what it takes in those first four matchups leading up to this showdown.

A 4-1 record to that point in the season would put the Jaguars in the perfect spot heading into a bye week on Sept. 28.

Coming out of the bye, they’ll continue a tough stretch of games with back-to-back games against last year’s first and second place teams in Hoover and Thompson.

Spain Park will host the Warriors for homecoming on Friday, Oct. 4, in a tough region showdown that the Jaguars lost 35-7 last year. Thompson will lose All-State quarterback Taulia Tagovailoa, but with plenty of other talent back, the Jags will have their hands full.

A week later, they’ll face cross-town rival Hoover on road on Friday, Oct. 11, looking for a more competitive game than the 32-7 showing they had last year.

After beating the Bucs twice in 2015, the Jags have gone on to lose the last three in a row and are just 3-15 all time against their rival.

The last two weeks of region play show why the first five are so important, as the Jags will get back-to-back games against Oak Mountain and Tuscaloosa County on Oct. 18 and 25, respectively.

While the Eagles will be improved this year, that will be the most manageable two-week stretch on the entire schedule when it comes to region play.

Spain Park won last year’s game against Oak Mountain 21-0, and will get the Eagles at home this year.

That win sparked a three-game winning streak, as the Jags then picked up a 42-21 victory against Tuscaloosa County a week later. While they’ll hit the road to take on the Wildcats this season, the Jaguars should be a favorite in that game yet again.

Spain Park will then close out the 2019 regular season on Friday, Nov. 1, with a home matchup against Shades Valley celebrating senior night. The Jags won that game 42-10 a season ago.

While every game on Spain Park’s schedule will be more manageable than it was a season ago, the entire slate of games is difficult. Winning games against Vestavia Hills, Mountain Brook, Oak Mountain and Tuscaloosa County is extremely important.

While that would likely be enough for a playoff berth, if the Jags can do that, they’ll also show they have what it takes to upset the likes of Hewitt, Hoover and Thompson as well.

By ALEC ETHEREDGE | Sports Editor The 2-8 record posted by the Oak Mountain Eagles in 2018 wasn’t telling of... read more