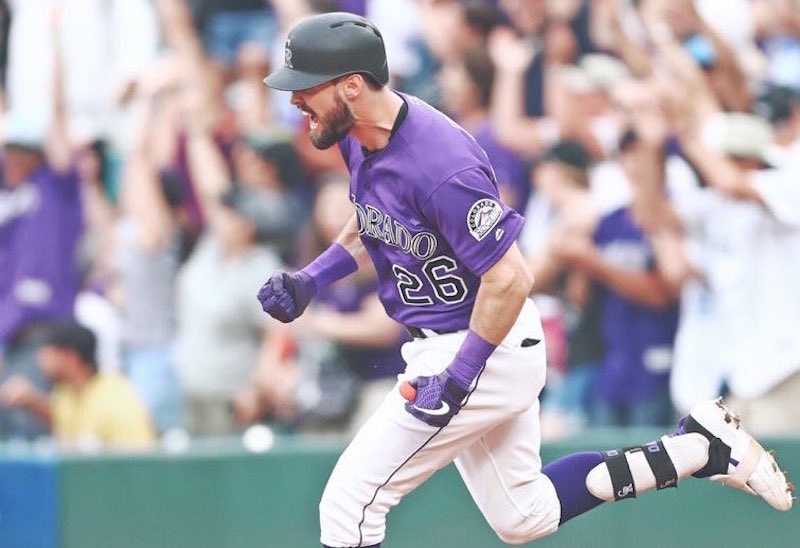 Former Oak Mountain baseball player David Dahl made his All-Star game debut on Tuesday, June 9, and went 1-for-1 with a single to right field. (Contributed/Colorado Rockies)

Stepping into the batter’s box for his first-ever All-Star game appearance, Colorado Rockies’ outfielder David Dahl looked up to take in the surroundings of the Midsummer Classic only to scan across the scoreboard and see the name “Davis Dahl” plastered across the massive 59-by-221-foot videoboard beyond the left field wall at Cleveland’s Progressive Field.

The former Oak Mountain High School baseball star didn’t let the blunder distract him, and the athlete, who had major surgery to remove his spleen less than four years ago, shared a smile with Chicago White Sox catcher James McCann before digging his cleats into the clay and settling in for a nerve-racking at bat.

Dahl settled in and eventually found himself in a 2-2 count six pitches into the at bat. After receiving several fast balls from Cleveland pitcher Brad Hand, Dahl received a breaking ball on the seventh pitch of the at bat and caught it on the end of the barrel lacing a line drive between the first and second baseman to give him a single in his first All-Star at bat.

At the time, the National League team trailed 4-1, but Dahl’s single put himself on first and moved Yasmani Grandal into scoring position with no outs.

Following a fly out, Paul DeJong walked to load the bases. A strikeout from Dahl’s teammate, Charlie Blackmon, put two down in the inning, but Pete Alonso made sure not to leave the runners aboard.

He singled to center field, which brought home Grandal and Dahl, who was able to pick up a hit and run scored in a special debut.

Dahl crossing the plate marked the final run of the game for the NL, leading to a 4-3 victory for the American League, but his hit and run were part of a rally that kept them within striking distance late.

So far this season, Dahl has been a top-10 hitter in the league when it comes to batting average, and entered the All-Star break with an average of .308 this season, while scoring 55 runs thanks to 93 hits.

While Dahl had a slight dip just before the break, it’s been a special season at the plate and the hit in the All-Star game should only lift his confidence for a strong second half to the season, which could determine if the Rockies advance to the postseason.

With the spleen surgery causing him to miss time, and a broken foot forcing him out for two months last year, Dahl has been through the ringer and could have gotten lost in the shuffle, but instead, the local product persevered and made the All-Star game in just his first full year as a starter in the MLB.