HOOVER – A 28-year-old Montgomery man was arrested on Friday, July 5, for drug trafficking. 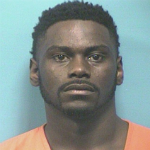 Charles Edward Samuel Jr. faces charges of trafficking a controlled substance, second-degree possession of marijuana and possession of a concealed weapon, according to court records.

The charges were brought by the Hoover Police Department, and Samuel was arrested in his hometown of Montgomery, where he lists an address off Midway Street.

A preliminary hearing for Samuel is scheduled for 8:30 a.m. on Aug. 7 with Judge Daniel A. Crowson Jr. presiding.