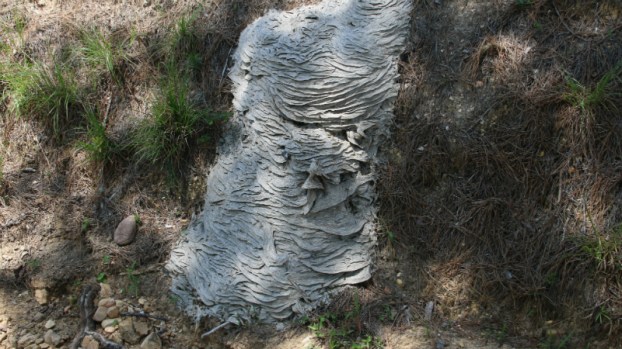 Massive yellow jacket nests have been found throughout Alabama this summer, including one in Shelby County.

Dr. Charles Ray, research fellow at Auburn University and entomologist with the Alabama Cooperative Extension System, said the large perennial nests form when a colony survives more than one year and for some reason includes more than the typical one queen.

Ninety perennial nests were documented in 2006, which was considered an exceptional year, and so far this year about 25 have been discovered, Ray said.

The nest was located on the side of the road, Ray said, and by the time he visited passing motorists had thrown objects at the nest.

Since his visit on July 2, someone had set fire to the nest, Ray said, though portions remain.

Ray advised anyone who discovers such a nest to leave it alone because agitating the insects only makes it more likely they will attack someone.

“Left alone, they are very docile relative to the small nests in the ground,” he said.

Experts like Ray are unsure why perennial nests occur.

Typically, a colony starts with one queen. The colony produces about 4,000 queens each year, but these offspring disperse in the fall to find a place to spend the winter.

The few that survive the cold and other threats then start new colonies the next year.

“There is tremendous attrition,” Ray said.

While the queens have at least a chance of surviving the winter because of an antifreeze-like compound in their blood, all of a colony’s workers would be expected to die from cold or starvation before the end of winter.

But perennial nests are built by colonies that survive into a second year—and often with multiple queens.

Ray has seen 75 queens in a single nest, while others have been found to have more than 100.

One theory is that the queens are sisters, who for some reason do not leave the nest as is usually the case.

“Normally in the fall these young queens are leaving their home nests, and I think for some reason they’re not leaving,” Ray said.

The super nest in Shelby County was about 5 feet tall and 3 feet wide, Ray said, and located on top of the ground.

Ray said he visited a nest in Baldwin County that he believed to be a third-year nest. He could see a couple of cubic yards of the envelope, which is the visible exterior of the nest, but added that the nest could have stretched 18 feet tall inside a trailer wall.

A typical nest in the ground might house 4,000 workers at the end of the year, while a perennial nest like the one found in Shelby County could have 15,000 wasps.

A nest found in South Carolina was verified to have over 250,000 wasps.

Ray requested that anyone who thinks they have discovered a perennial nest, not a typical smaller nest, to contact him at raychah@aces.edu or at raychah@auburn.edu so he can study the nest.