ALABASTER – An Alabaster man was recently released from the Shelby County Jail after being arrested and charged with domestic violence by means of strangulation or suffocation. 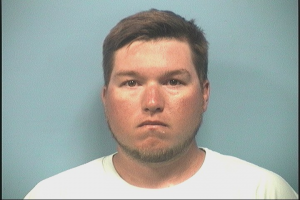 Christopher Troy Gaines, 29, who lists an address on Kentwood Way, was arrested by the Alabaster Police Department on July 5 and was released July 6 on $10,000 bail.

According to court documents, on July 4, Gaines “grabbed the victim around the neck and choked her to the point that she could not breathe.”

Court documents state that during the altercation, the victim sustained a cut on her forearm, a bluish bump above her left eye and red marks on her neck and collar bone. There were signs of petechiae, which are tiny round brownish purple spots that appear on the skin due to bleeding under the skin, visible on the victim’s neck and eyes.

Domestic violence strangulation is a Class B felony, which, upon conviction, could result in a jail sentence of two to 20 years and fines up to $30,000. This case has been assigned to Shelby County Circuit Court Judge Patrick Kennedy.