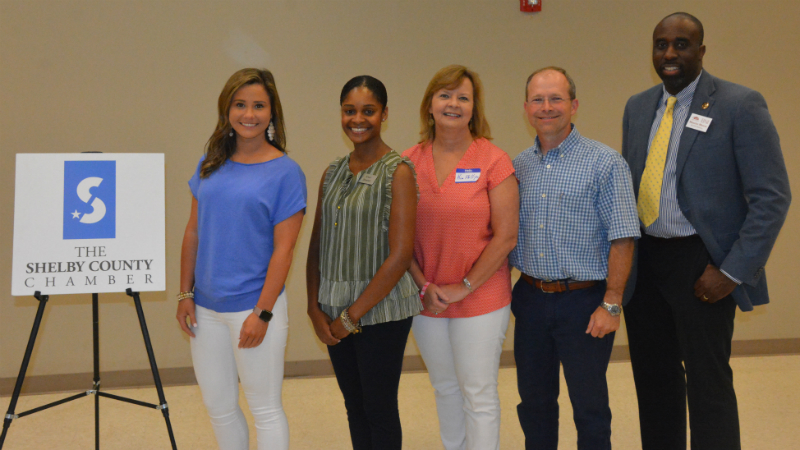 COLUMBIANA – The 2019 recipients of The Shelby County Chamber’s Small Business of the Year awards offered insight into their success at the Chamber’s Connections Luncheon on Thursday, July 11.

Brittani Morris State Farm Insurance Agency was awarded for the second time since the business opened in September 2016.

Morris said finding the right employees has been crucial to her success.

“My name may be on the door, but it wouldn’t be without the people inside,” she said.

Vinehouse Nursery opened in 2017 but had no customers for the first three months, McAlpin said. The business grew to serve 10 children by late in 2018 and now 32 children in four classrooms.

“Families have been calling from left and right, and I’m so thankful for that,” McAlpin said while also noting the facility’s “100-percent eco-friendly” approach and offering programs such as kid Zumba at no extra cost.

Mercer founded KAT’s Delivery in 2014 as a legacy of his late mother, who later in life needed Mercer’s help with tasks.

Mercer said assisting his mother during a time in which he was also helping care for a young child inspired him to start a business that could help people with things like food delivery.

“I wish there was a service that could’ve helped me and her at that time,” he said.

Crisman noted a study about the growing number of Americans who have pets that sleep in the same bed or bedroom with them.

“We’ve always loved our dogs and cats, but now they’re even more a part of the family,” Crisman said.

280 Animal Medical Center has thrived because of a customer-oriented approach, Crisman said.

“We want people coming to see us to be an experience instead of a transaction,” he said.

Phillips said she and her husband Butch founded Double Tap Training Grounds LLC in addition to other jobs, and a common request emerged from those who visited the firearm training center.

So, Shiloh Clays was born in 2018 and is an 18-station sporting clay range and more.