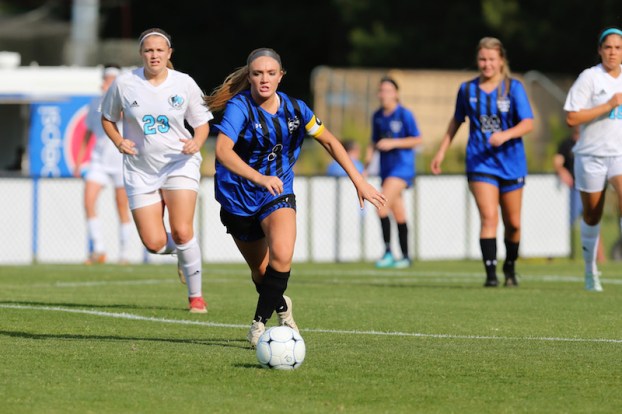 Chelsea’s Lexie Duca had a spectacular senior season with the Hornets, setting state records, and on Wednesday, July 10, she was named to the All-Region Team. (For the Reporter/Cari Dean)

KANSAS CITY, Mo. – With 10:56 left in a quarterfinal matchup against Opelika, Chelsea senior Lexie Duca pitched a pass forward to a teammate, but it was more than just a normal pass.

Duca’s pass found its way to sister Haley Duca, who buried her shot into the back of the net for an 8-0 advantage late in the game. With the Final Four already in grasp thanks to the wide margin, the goal wasn’t key in the win, but the sister-to-sister connection closed out a special moment for Lexie Duca during her senior season.

Having tied the AHSAA career assist record for most assists at the high school level in the state just a few minutes earlier, Lexie broke that record by recording her 107th assist with the Chelsea Hornets in her final home game to help advance her team to the Final Four.

The future star at the University of North Alabama went on to add one more assist in that game and finished the season with 40 to set a single-season record in state history and finished her career with 112 total assists.

Now, the former Chelsea Hornets’ standout has been named to the 2019 All-Region Atlantic Soccer Team after the list was released by the United Coaches Soccer Association on Wednesday, July 10.

The honor made her one of the 47 best players across the Atlantic region, featuring players from states like Alabama, Delaware, Georgia, North Carolina, South Carolina and Virginia.

Duca also added 13 goals to her monster assist number this season, but as a team leader and player, she was always looking for a way to involve her teammates in every player, which is what made her one of the best leaders in Shelby County out of every sport this season.

By making the team, she did something that only two other Chelsea players have ever done as part of a storied program over the last several years. In 2012, Alli Cochran was named to the team, while Britne Holderby Sandlin made the team in 2014.

Duca has been a star in Shelby County over the past four years, and earned a spot on the All-County team every season she was with the Hornets. As a freshman, she was named a second team player, as a sophomore an honorable mention player, and each of the last two years, Duca was named to the first team.

Her mark has been left on the county, and her leadership will continue to resonate through the Hornets for years to come.