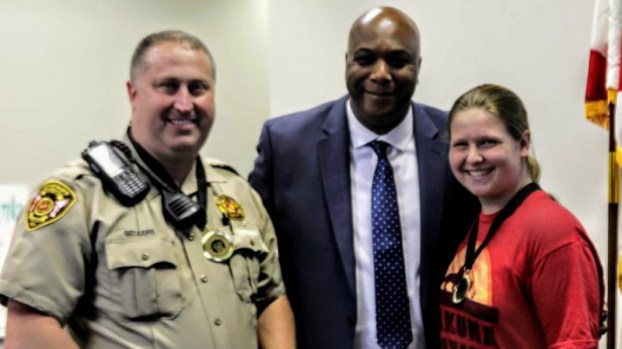 NORTH SHELBY – Shelby County Sheriff’s Deputy James Sellers, who serves as the School Resource Officer for Oak Mountain Elementary School, and his daughter, Jayven Sellers, were honored by Superintendent Lewis Brooks with Journey Shaper Awards at the June 11 Board of Education meeting.

Deputy Sellers and his daughter were honored for their heroism in helping to battle a fire at Oak Mountain Elementary School on May 26.

Javyen, a student at Columbiana Middle School, and her father were headed to see a movie when they stopped at the school to drop off some items. It was then that Jayven first noticed the fire and drew her father’s attention to it.

Deputy Sellers pulled the fire alarm, called 911 and started battling the fire with fire extinguishers until local fire departments arrived on the scene. Because of his efforts, the damage was mainly contained to one classroom on the kindergarten hallway.

Brooks shared that the recognition for Sellers was not only for his efforts on May 26 but every contribution he makes only a daily basis serving as a school resource officer. Brooks said that Sellers plays a critical role at Oak Mountain Elementary, not only in providing security, but also in the relationships he has built with students and staff.

Brooks noted that Sellers helps in the OMES STEM lab and has been instrumental in helping with Camp Journey, a summer camp program the SROs provide in various communities.

Sellers and his daugther are the second and third recipients of the award, which Brooks implemented to honor individuals who go above and beyond the call of duty in helping to shape the journeys of students and staff.

The first recipient was bus driver Wayne Price from the Montevallo community who was honored for providing breakfast for students on his bus on a day when school was delayed.